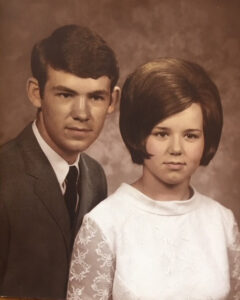 William and Betty Sue Feese, from Columbia, Ky., were married in 1969 and honeymooned in the Smoky Mountains. They stayed at the Pink Motel during that stay and returned for their 50th Anniversary in 2019. (Photos courtesy of William Feese)

William and Betty Sue Feese, from Columbia, Ky., were married in 1969 and honeymooned in the Smoky Mountains.  On the second night of their honeymoon, they stayed in Cherokee’s Pink Motel on April 6, 1969 and repeated that trip and stay at the motel 50 years later on April 6, 2019.

One interesting part of the story is that both trips were made in their 1966 Chevelle Malibu, a two-door hardtop, 4-speed with bucket seats.  Both are retired Adair County (Ky.) high school teachers.

The couple has raised beef cattle as well as Appaloosa horses and have passed their love of animals onto their three children – Shantilla, Shannon, and Jacob – who are all veterinarians with their own practice, Adair County Animal Hospital in Columbia. 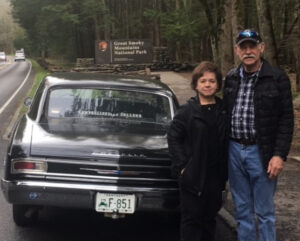 “We have made many trips to the Smokies, several when our children were still home, visiting Cherokee to see the bears, snakes and to do some shopping,” William noted.  “Now, we travel to the Smokies at least twice a year – in the spring on our anniversary and again in the fall to see the beautiful colors.  Occasionally, we spend our summer vacation there, and sometimes we return during the winter.  On most of our trips, we travel over the mountain to Cherokee.”