ON THE SIDELINES: Let’s finally get rid of the ‘jocks are dumb’ trope

The movie trope of the dumb jock has been used over and over again, especially throughout the 1980s.  I think it is time to put that trope to bed as many student-athletes are excelling at both these days, especially the first part.

This year’s valedictorian (Joaquin Layno) and salutatorian (Blake Smith) for Cherokee High School (CHS) are both multi-sport athletes.  Both were members of the Cherokee Braves varsity football team who won the 2017 1A NCHSAA State Championship and they were also members of the Braves varsity basketball and track and field teams.  They, along with many of their teammates and other athletes in general, were honored at both the CHS Academic Awards banquet and the Athletic Awards banquet held recently. 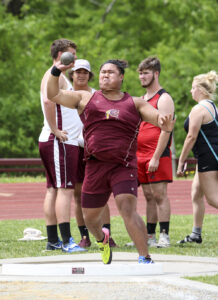 Four years ago, I wrote in this column an article entitled “Do student-athletes make better students?”.  In that column, I referenced a study entitled, “A Comparison of the Educational Performances of Athletes and Nonathletes in 133 North Carolina High Schools” which found that the average GPA for athletes was 2.86 compared to 1.96 for non-athletes and athletes had a dropout rate of 0.7 percent compared to 8.98 percent for non-athletes.

When I interviewed Smith recently about being named the salutatorian, he noted, “Everything I do, I try to put everything I have into it and put a lot of effort into it.”

That sort of work ethic and positive mental attitude serves him and others well in both their athletic endeavors as well as the in the classroom, and it most definitely accounts for the better classroom performances by most athletes.

Earl Campbell, Heisman Trophy winner and two-time NFL MVP running back, once said, “I talk to student-athletes.  I try to get them to remember that they’re not just athletes, but student-athletes.  You need to get an education, keep your hands clean and try to represent the university.”

At CHS’s Academic Awards banquet on May 14, the keynote speaker was Kelsey Jackson who earned a Bachelor of Arts degree in business management from Montreat College while also playing college basketball.  She spoke to the students about the importance of self-discipline and hard work, two tenets of any student-athlete.

And, she hammered home the message to have determination, “It doesn’t matter how long it take you to finish.  What’s important is that you finish.”

She was referring to the journey to a college education, but it could easily be applied to any goal that you set for yourself in life.

Jackson also said that her parents made sure she put the emphasis on the first word of student-athlete.

I feel that most student-athletes get it and do put the proper emphasis on their education.  All you have to do is look at Cherokee High School to see that is the truth.

I’ll leave you with a quote by the late Nelson Mandela who once said, “Education is the most powerful weapon which you can use to change the world.”