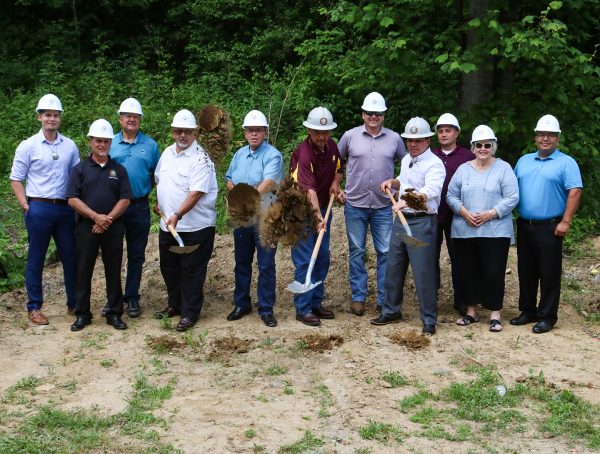 Tribal leaders of the Eastern Band of Cherokee Indians broke ground on the new Kolanvyi Community Center, located in the Big Cove Community, on the afternoon of Wednesday, May 22.  The new 3,600 square foot building, designed by Johnson Architects, is being built by Owle Construction and is estimated to be completed by this December.

This is the first phase of this project with a gym to follow in phase two.

“This is a good day,” said Principal Chief Richard G. Sneed.  “I want to say a special thank you to our Project Management Team for developing a process by which we can really expedite these projects.  Our vision for this is gone are the days when it will take 10 years for a project to roll out.”

Vice Chief Alan B. Ensley said, “This is always a great occasion.  These events are fun.  I remember when Yellowhill got theirs and how excited we were.  These are exciting times for the communities.  I hope everybody in the community gets out and gets involved.”

He spoke of the importance of community, “That’s where it all begins – in our communities.  So, I hope you really take ownership of this new building and the community club will grow along with hard work.”

Big Cove Rep. Perry Shell spoke of the pride Big Cove Community members have.  “If you go to Cherokee now or you go to the school, or wherever it is in a public place, you will see a lot of people wearing Kolanvyi shirts.  You don’t see that in these other communities.  You don’t see them out there like you do Big Cove.”

Big Cove Rep. Richard French said, “This is a long time coming.  Big Cove is a great community – always has been, always will be.”

He said community members in Big Cove look out for one another.  “In Big Cove, we stick together and we try to help one another.”