Lew Harding stands strong for those that have fallen

There are a lot of ways to describe Lew Harding. War hero and community leader are two that come to mind. The first way he would probably describe himself is as a proud grandfather.

These are all true. 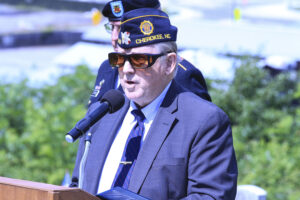 Harding, a member of the Eastern Band of Cherokee Indians, has served as the commander for Steve Youngdeer American Legion Post 14 since 1997 and has made sure to make Memorial Day special each time it comes around.

“It’s a spiritual thing, for me, more than anything,” said Harding.

He grew up just passed what is now Unity Hill and served over a decade in the military. During that time, he earned a long list of awards and decorations, including the Distinguished Flying Cross. This also means that Harding has seen a lot of things he wishes he could erase from his memory.

“Many that I flew with are in that category of the fallen,” he said.

Harding said that of the three classes of advanced flight training he was with in Corpus Cristi, Texas, there were 19 people. In two tours in Vietnam, he was one of only two that made it back home.

“It’s scars that don’t always heal, but because of that, you feel highly motivated to serve the veteran’s community,” he noted. “Those of us who survived, and to honor those that didn’t come back.”

Harding says that he does not look back on the war fondly, and instead turned to serve those who truly need it.

“That’s the healing part. We have goals to our mothers that have lost youngsters in combat. They always come; it’s almost like a spiritual thing for them. Because they recognize that here’s people who have been there, and they are honoring those that they love.”

This is something in which Harding takes pride. Whenever he speaks to anyone, he treats them with respect. He emits positivity wherever he goes.

“If you don’t focus on the healing part of where you need to go, you’ll get caught up in the anger and the ambivalence,” said Harding.

He says it’s essential on a day like Memorial Day to focus on others. That there’s a reason you have the day off, and that it doesn’t take much to care for others.

“We try to get people out of the commercial ‘what’s in it for me mindset’ to ‘how may I serve.'”

Harding and many others will be gathering for a Memorial Day ceremony on Monday, May 27 at 11 a.m. They have changed the location from years past to the Cherokee Veterans Park by the Tribal Council House, where multiple flag posts have been added.

Each year, our Tribe and our nation honors the fallen of all of American wars in a sacred ceremony of remembrance and gratitude.  The purpose of this day is a noble one.  The men and women buried on Yellowhill, at Arlington (Va.), and in military cemeteries around the world paid a great price for the freedoms that we hold dear.  Those freedoms that we sometimes take for granted are dialy reminders of their ultimate sacrifice and the debt we owe to them, a debt that we can never repay. 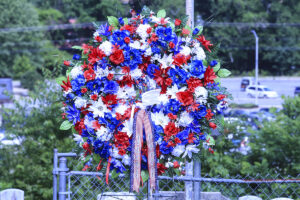 A wreath is shown at the Yellowhill Veterans Memorial Cemetery on Memorial Day 2017.

On this Memorial Day, we mourn our fallen and remember their legacy of courage and the future that they gave us.

Through the teams of their loved ones, and on behalf of a grateful nation, we pledge to work for a greater peace, greater unity, and greater forgiveness as we work to heal our nation and our world.  We owe this to them and our children.

On this day, and every Memorial Day, those who have died for us would ask no less.  They live in our history, reside in our hearts and rest forever in the arms of God.