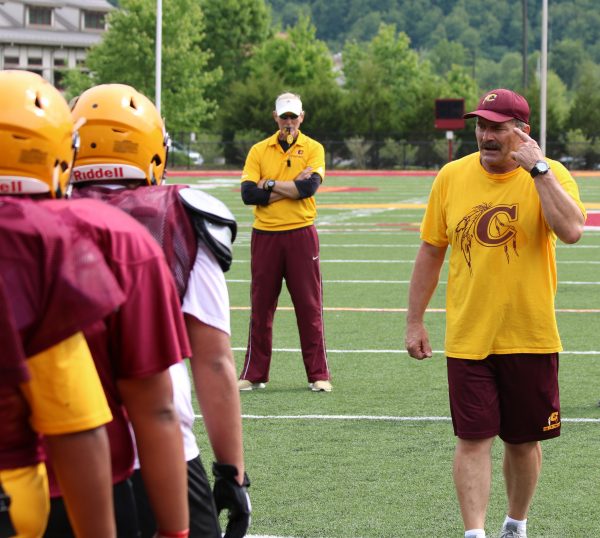 The Spring of 2017 wasn’t an easy one for David Napert.

A string of circumstances had left him without motivation for several months. He had decided to take some time to himself, to think, and be with his family. Someone who was always there was Kent Briggs, Cherokee’s head football coach. They had been close for over a decade, ever since Briggs first signed Napert onto his staff at Western Carolina University.

This situation was a different. Briggs was there as a friend, not a colleague. Time and time again he stopped by the Napert household, and after a while Briggs convinced his friend to come substitute teach at Cherokee High School. He could earn some money and get the lay of the land.

“I said this is an unbelievable place,” recounted Briggs on what he told Napert.

“It’s a different culture than what he would be used to, and it would take a little bit of time to adjust, but the rewards will be tremendous. Because you’re going to fall in love with being here.”

Two years later, on May 6, 2019, the Cherokee Central Schools Board of Education approved the hiring of Napert as the new CHS Football Head Coach. Napert has over 30 years of coaching experience between the college and high school levels, but it was a long road to this spot.

In the fall of 2017, Briggs brought Napert on staff to coach offensive and defensive line, a specialty of his for decades. Though it was something Napert had always done, that doesn’t mean he was completely comfortable.

“I got humbled. I’d gotten used to being a college coach, then all of a sudden I’m back kind of at the bottom, I didn’t know anyone here,” said Napert.

“[The kids] didn’t respond to me at all…they wouldn’t talk to me, basically.” 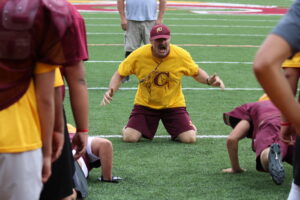 Coach Napert is known for his intensity.

He persisted, though. Napert has a strict and ferocious mindset, but he says he’s been working on new coaching styles to get through to different kids.

After weeks of disconnect, there was finally a breakthrough.

On Dec. 1, 2017 Cherokee made the long trek to Bakersville. It was the state playoffs semifinals against Mitchell, a team that had trounced them 45-14 almost a year ago to the day.

“Everyone from Cherokee was there, I look up into the stands and said ‘guys, look up there,” said Napert.  “That’s probably three generations of Cherokee people that have come here for you.’ I started getting emotional with the kids. This is what you’re representing.”

Cherokee handled Mitchell 42-28, and after the game the linemen were hyping each other up, this time with a plus-one.

“They said ‘Where’s Napert? Get Napert over here,’ and they asked me to take a picture with them. They’d never made me feel a part of them until that night.”

Since that day the trust has grown. Not to mention the win surged the team to the 2017 NCHSAA 1A State Championship, where they knocked off North Duplin 21-13. It was a landmark day for Cherokee, and even more so for the coaches on that team.

Briggs decided to stay one more year at the school, giving Napert the extra motivation to stay on staff. Briggs, of course, was made an honorary member of the Eastern Band of Cherokee Indians the following the year.

They have a bond that is powerful. Because of this, Briggs doesn’t want people to think he handed Napert the job.

“My relationship with him, all it did was give me knowledge of who he is,” said Briggs. “But, I sure didn’t try to do him a favor. I was trying to do Cherokee a favor.”

Napert respects Briggs immensely. He says that he has never used his first name while on the job, even when Napert was his head coach at Smoky Mountain High School. There’s a reason he’s at Cherokee, and there’s a reason they’ve been friends for so long.

“He’s always been one my mentors. He’s always been someone that I put on that list of three or four people in your life that mean the most to you. Like my dad, my mom, he’s on there.”

Now there is a significant transition. Briggs isn’t gone. He’s staying to help pass the reins to Napert and coach the skills positions for spring training. These two coaches are close, but their styles are very different. Briggs is known for his cool demeanor, and Napert talked about how “meticulous” he could be about everything.

“He might be real nice, but he’s also a big-time competitor,” said Napert.  “Just because he doesn’t hoot and holler and scream like me, don’t take that the wrong way.”

Meanwhile, you could probably hear an angry Napert from the next county over.  It isn’t simply a scare tactic, however. He’s loud when he wants energy, and many of his players have responded to his passion.

“His intensity and how hard he pushes us; he keeps us mentally tough and ready for anybody,” said junior lineman Cameron Reed when asked about his favorite thing about Napert.

Napert says that he has always brought his intensity to each school he’s coached. During that journey, however, he also says that his mentality has changed.

“I feel like I have a different calling now. I care more and more about the kids. I was so tunnel vision about football that sometimes you don’t see anything else.”

He said he’s looked back at what football has meant to him and the people he’s coached.

“I’ve had kids sit in my office and bawl their eyes out. 6’6″, 300 something pounds – knowing that you can hold a big kid like that. Something is wrong with family, something bad happens, and you’re the closest thing in his life. That’s what it’s all about.”

He also said his vision for the team isn’t just focused on the field.

“I want to see our kids take academics more serious…that’s what my goal is. They have wonderful teachers, they have to learn how to respect them.”

Napert recalled all the different types of situations and towns he’s coached in. Through it all, he said Cherokee is still unique. He’s attempting to learn all he can about the culture, and he wants to use it to connect with his players.

“I think they should be so proud to represent the Tribe,” said Napert.

This is not the path Napert saw for himself just a couple years ago, but he says he’s ready for the challenge. He knows that it’s not always going to be easy. There will be peaks and valleys.

He also knows, through whatever happens, that Kent Briggs will still be coming around to see him.