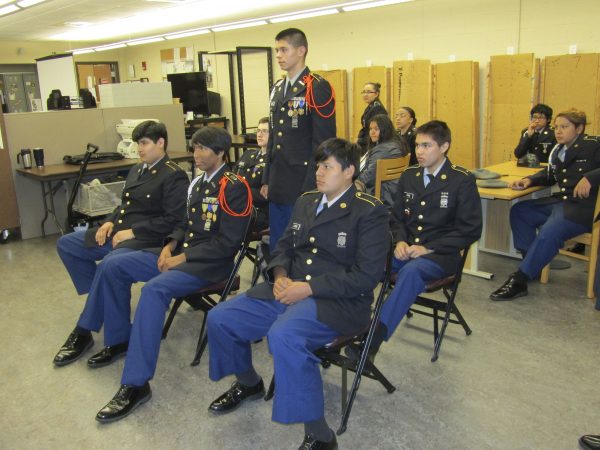 After the inspection was completed, the Braves Battalion received a score of 95 out of 100.  This score gave the necessary points to achieve the coveted Honor Unit of Distinction (HUD) award.  Only the top 10 percent of schools inspected, within the brigade, earn this award.  That is over 335 schools, within the Brigades’ control, that offer JROTC.

The inspection was an intensive examination of a myriad number of events.  There were two briefings the Cadets had to present.  One, covering a Continuous Improvement Plan, which is something that benefits or helps their program to continue.  The other was a Service Learning Project which is a community oriented endeavor.  Eight Cadets were interviewed, had their portfolios examined, and were asked questions about their experiences in JROTC.

The drill team, consisting of 12 Cadets, and led by Cadet Captain Noland Queen, had to perform 22 marching maneuvers under the scrutiny of the two inspectors.  The Color Guard, with four Cadets, and commanded by Cadet Major Toby Johns, navigated through 44 precision maneuvers.  Both teams were coached by the Army Instructor, CSM Frank MacRae.  Following the two drill events was an inspection of the Senior Army Instructors Portfolio, LTC William Carter.  This inspection was conducted to ensure he was teaching the correct curriculum to his Cadets.