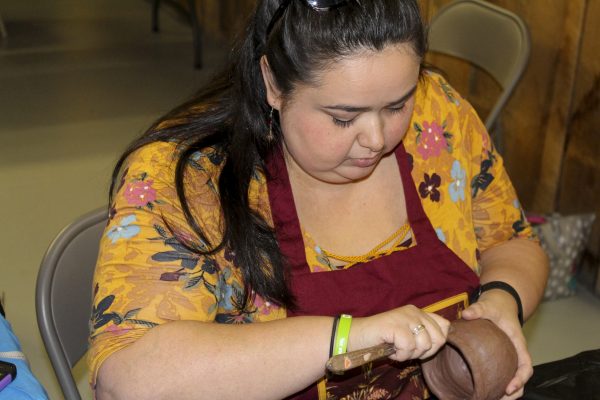 Gina Myers, an EBCI tribal member from Cherokee County, works on a pot during the 3rd Annual Kananesgi Pottery Festival at the Cherokee Indian Fairgrounds on Saturday, May 4. (SCOTT MCKIE B.P./One Feather photos)

An art form that began thousands of years ago, after the mud dauber (Didanisisgi) taught Cherokee people how to make pottery, was on display at the Kananesgi Pottery Festival.  The event was held at the Cherokee Indian Fairgrounds on Saturday, May 4 and featured many noted potters among the Eastern Band of Cherokee Indians (EBCI).

“I’ve been doing pottery for about 45 years now,” said Dean Reed, an EBCI tribal member from the Birdtown Community, whose work is included in the archives of the National Museum of the American Indian.  “I use all of the traditional methods using the paddle stamp for designs.  I do a lot of legends in my pottery such as the water spider and the seven clans.” 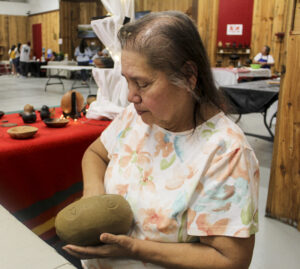 Dean Reed, an EBCI tribal member from the Birdtown Community and a founding member of the Cherokee Potters Guild, is hard at work on a new creation during Saturday’s event.

She got into making pottery by watching elders years ago.  “Then, I was just sort of self-taught from there.  I picked up clay and worked with it every week or so until I got a decent piece of pottery, and I’d always look back at a piece and see what I could have done differently to make it better.  I just picked up clay and never put it down.”

Reed said when she first started doing pottery, she primarily used the hand-building method.  “I would etch in some of the old designs.  But, back in 2002, I was one of the founders of the Cherokee Potters Guild and we brought back the cooking vessels with the paddle stamps – a style that pre-dated the 1600s.  We use all of those old, traditional designs.  We do the pit firing like it was done a long time ago.”

Mary Welch Thompson, an EBCI tribal member from the Big Cove Community, is a noted Cherokee basket maker and got started in the world of pottery in 2002 with the founding of the Cherokee Potters Guild.  “I’d never done pottery, but I knew that I wanted to try it.  So, I saw the opportunity and I jumped in there.  I started it, I liked it, and I’ve been doing it ever since.”

When asked of the difference between her two art forms, Thompson noted, “With baskets, it is so much work and time-consuming to get your materials ready and getting through that process whereas, with pottery, I can cut myself off a piece of clay, sit down and start working.  I have access to clay so that makes it a lot easier.”

She said pottery is a “stress-reliever” but she said the connection to Cherokee culture is the main reason she enjoys the art form.  “It just amazes me that somebody’s grandma’s grandma’s grandma figured this out and it’s still going on right now.  To be able to fire it, waterproof it, cook with it; it just amazes me how productive and how much ingenuity they had to be able to come up with it.  So, that culture and history intrigues me as much as sitting there and being able to produce something with your hands.” 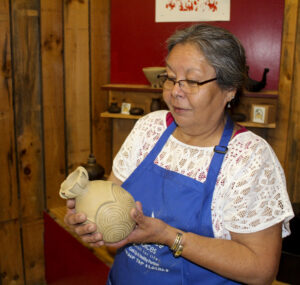 Gina Myers, an EBCI tribal member from Cherokee County, is the granddaughter of the late Beloved Woman Amanda Swimmer, a noted Cherokee potter.  Myers said, “I did it a lot when I was a little kid with my mom, and then I stopped for a really long time.  But then, when grandma (Swimmer) passed away last fall, it became a little more important to continue doing a tradition that would get lost if we didn’t pass it on.”

Myers said she implements several methods of Cherokee pottery depending on the piece she’s working on.  “If we’re doing a larger pot, we’ll do the coiling method, but if they’re smaller pieces we’ll just build them up by hand.”

She said following traditional practices is important in her pottery and noted, “I really like making animals out of mine.  Many times, I’m either attaching animals to the side or sketching animals into the piece.”