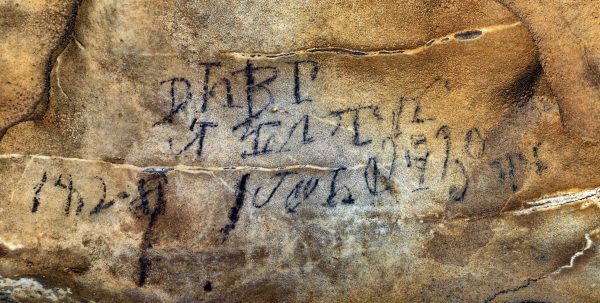 Inscriptions on a cave near Fort Payne, Ala. that contain Cherokee syllabary have been translated in a remarkable new study lead by a member of the Eastern Band of Cherokee Indians (EBCI).  Beau Carroll, field archaeologist for the EBCI Tribal Historic Preservation Office, was a co-author of a study entitled “Talking Stones: Cherokee syllabary in Manitou Cave, Alabama” that was published in the Cambridge University Journal of Antiquity Volume 93, Issue 368 April 2019.

“My advisor, Jan Simek at the University of Tennessee, is interested in caves and prehistoric art,” Carroll said.  “He noticed writing that he recognized but couldn’t read so he took some pictures and shared them with me.  I realized quickly that they were Cherokee syllabary and started to try to translate them.”

Along with Carroll; Simek, Alan Cressler, Tom Belt, and Julie Reed are named as authors of the study which states in the introduction, “Inside Manitou Cave in modern Alabama, 19th century Cherokees carried out sacred ceremonies, recording their activities on the walls using Cherokee syllabary, a system invented in nearby Willstown by Cherokee scholar, Sequoyah.  Through collaboration between modern Cherokee scholars and Euro-American archaeologists, the authors report and interpret – for the first time – the inscriptions in Manitou Cave.” 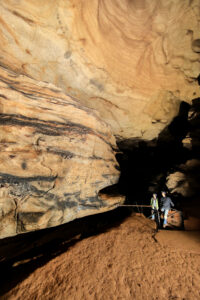 Beau Carroll, right, field archaeologist for the EBCI Tribal Historic Preservation Office and an EBCI tribal member, and Julie Reed are shown in Manitou Cave in Alabama where Cherokee syllabary has been found inscribed on cave walls.

When he first saw the photos of the inscriptions, Carroll said he became excited and immediately wanted to know more.  He began to work with Tom Belt, retired Cherokee language instructor at Western Carolina University who is a Cherokee Nation citizen and a fluent Cherokee speaker.  “Some of these translations were difficult and I believe required someone who had Cherokee as a first language,” said Carroll.

The first two inscriptions translated spoke of a stickball game in April 1828.  The first one translated as “leaders of the stickball team on the 30th day in their month April 1828” and the second one read “we who are those that have blood come out of their nose and mouth” and included a signature of Richard Guess, Sequoyah’s son.

The study addresses the second translation as such, “We interpret this inscription as referring to a Cherokee stickball game – probably the same event as recorded in the first inscription.  In all the ceremonial interludes associated with these games, each team was led by a religious advisor who guided their rituals.  We believe that the spiritual leader of this team was Richard Guess.  As the game progressed, the condition of the team members reflected their experiences on the field, such as injuries resulting in bleeding from their noses and mouths.”

According to the study, “Cherokee syllabary writing on the walls of Manitou Cave was first recognized by historian Marion O. Smith and cave photographer Alan Cressler in 2006 during an examination of historical signatures on the walls.  We have since identified Cherokee syllabary inscriptions in various places within the cave, although there are three main spatial groups.”

The conclusion part of the study speaks to the collaboration between the authors.  “…an accurate and textured understanding of Manitou Cave would not be possible without close collaboration between Euro-American and Cherokee scholars.  Euro-American archaeologists found and documented the inscriptions, while Cherokees determined their meaning and historic context in terms of Cherokee memory and experience.”

Carroll noted, “Usually, studies like these are from the outside looking in because the people who are conducting the study are not Cherokee.  This study is different because it has another point of view that is lacking in the academic world.  This work was personal, and I felt I needed to show that Cherokee people haven’t had much of a voice in the archaeological community, but that was going to change.  My main focus was to show the benefits of tribal consultation, and the work speaks for itself.”

Russell Townsend, EBCI Tribal Historic Preservation Officer, said Carroll’s work is very important to their office, “Beau’s research at Manitou Cave has been very beneficial for Cherokees everywhere, but it is specifically useful to the EBCI THPO as a means to connect the Eastern Band to activities practiced by Cherokee people in a much larger Cherokee World.  By the beginning of the 19th Century, the focus of the Cherokee polity had shifted south into Georgia and Alabama.  Cherokees were becoming industrialized and entrepreneurial, but they had not given up their core beliefs that made them uniquely Cherokee.”

He adds, “Beau’s research demonstrates that the same ceremonial practices involving the game of stickball, were still important and still being practiced in a modernizing world and were basically the same wherever Cherokees lived.  Beau’s research demonstrates that we change along with the changing world, but the conservative cultural traits that make us uniquely Cherokee, endure.  That’s what the EBCI THPO tries to document.”