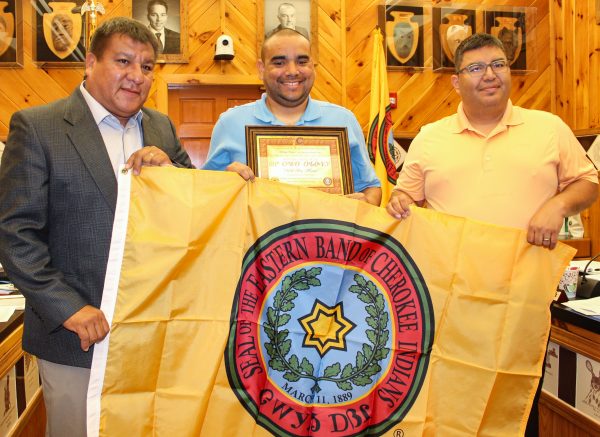 Will Poolaw, center, was made an honorary member of the Eastern Band of Cherokee Indians following approval of Res. No. 567 (2019) by Tribal Council on Thursday, May 2. Tribal Council Vice Chairman David Wolfe, left, and Tribal Council Chairman Adam Wachacha presented Poolaw with a certificate and EBCI tribal flag. (SCOTT MCKIE B.P./One Feather photos)

To a packed crowd of family, friends, and supporters in the Tribal Council Chambers, Will Poolaw was made an honorary member of the Eastern Band of Cherokee Indians during the regular session of Tribal Council on Thursday, May 2.  With the unanimous passage of Res. No. 567 (2019), Tribal Council made it official and Poolaw was given the Cherokee name Will Big Heart.

“Thank you all so much,” he said following passage of the resolution.  “It’s been an honor.”

Poolaw, who is Pawnee/Osage/Yuchi/Kiowa originally from Oklahoma, thanked his family and the entire community for their support throughout the years.  The resolution was submitted by Francine Watty and states that Poolaw came to live with John and Henrietta Gloyne after his grandmother passed away, “…at the time, it was unknown to anyone that he would blossom into the number one Cherokee Braves fan in the nation, and across the map, even in Oklahoma, Tennessee, and Florida.  His dedication to the Cherokee Braves is unlike any other…” 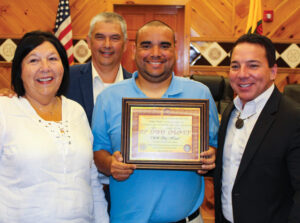 During Thursday’s honoring, Henrietta Gloyne thanked everyone for bestowing the honor on Poolaw and noted, “Will will represent you all good.”

Watty tearfully said that she’s been working on the resolution to honor Poolaw for some time and thanked everyone for their support of Will over the years.  “Will doesn’t wait for someone to go and help him.  He’s gotten his own jobs on his own.  But, the first thing he tells his employer is ‘I work at the school too’…”

She added, “We appreciate Will and what he’s done.”

Watty’s resolution ends accordingly, “Will has a heart of gold and loves everyone he comes in contact with.  Not only is he devoted to his family, but he is devoted to his community.  His warm welcome and genuine concern about everyone will truly melt your heart.”

Principal Chief Richard G. Sneed commented, “When I think about Will, there’s one word that comes to mind, and that’s passionate.  When you see Will on the sidelines at a football game or a basketball game, he’s passionate.  He’s all in.  He loves the Braves.  He loves our Tribe, and there’s nobody more deserving of this.”

Vice Chief Alan B. Ensley said of Poolaw, “He does everything for every sports team at Cherokee High, but any event that goes on up there, Will is a part of it…we appreciate Will.  This is a great day.” 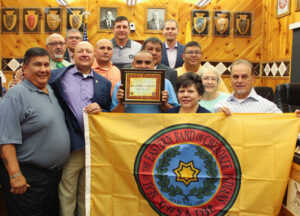 “Thank you Will for all of your service to the Tribe and the school,” said Vice Chairman Wolfe who also serves as the Tribal Council representative to the Cherokee Central School Board.  “On behalf of the School Board, we appreciate everything that you do for our kids.  There’s been many students that you’ve had an influence on.”

Chairman Wachacha noted, “Will is truly the number one Braves fan, but he actually checks on all of the enrolled members on all of the teams in the conference.  When my daughter and son were playing, he’d come by and ask how they’re doing…I appreciate Will and his friendship.”

Poolaw, fifth from left, is shown with Cherokee High School athletes and coaches who came to the Tribal Council House on Thursday morning to support him.