The family of Abraham Wachacha was presented with a flag of the Eastern Band of Cherokee Indians during Tribal Council on Thursday, Feb. 7, in honor of his service to the tribe as a Tribal Council representative for the Cherokee County/Snowbird Community. Wachacha died Dec. 18. 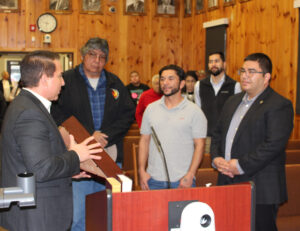 Adam Wachacha spoke of how everyone loved his father and after he died, the chairman received calls of condolences from across the country. “It’s overwhelming how far our he reached in touching people.”

In the same session, the Snowbird Youth Center was renamed for the former council member. Some who supported the move spoke fondly of the former representative. Gil Jackson, remembered the things Abraham Wachacha fought for while in council. “The credit goes to Abraham Wachacha,” Jackson said. He spoke of the services in his community that long ago didn’t exist, and he hoped the renaming resolution passed unanimously. “He really was a council member for all of us.” Adam Wachacha said of his father’s work, “This is one of his big hurrah’s.”