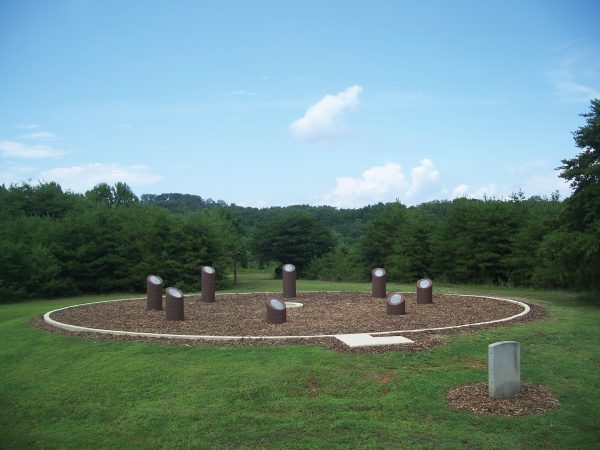 The Chota Memorial site, located in eastern Tennessee, is part of a 76-acre parcel involved in the Eastern Band Cherokee Historical Lands Reacquisition Act which was passed by the U.S. House of Representatives in April 2018. (Photo by Sequoyah Birthplace Museum)

The Eastern Band Cherokee Historic Lands Reacquisition Act passed the U.S. House of Representatives by a roll call vote of 383-2 on April 16, 2018.  If passed by the Senate and enacted into law, the bill would return around 76 acres of land in eastern Tennessee to the Eastern Band of Cherokee Indians (EBCI).

During the Tribal Council session on Thursday, Feb. 7, Principal Chief Richard G. Sneed said the bill is currently “blocked” but said he and other EBCI tribal leaders plan to address the issue head-on.

Chief Sneed said that himself and several tribal leaders are heading to Washington, DC for the upcoming NCAI Winter Session on Feb. 10-14 as well as to meet with Congressional leaders for “lobbying work” and said they plan to bring up the bill.  “We got it through the House last year with only two ‘no’ votes.  Here’s where you see national politics really impacting us locally.  The only ‘no’ votes we got came from the folks down near the Lumberton area, and you know why that is.”

He went on to state, “So, we got it through the House.  It went to the Senate Committee on Indian Affairs.  Everything was looking good and Sen. (Richard) Burr (R-N.C.), a North Carolina senator, he basically told us he’s going to block it at the Senate level.  So, we now have to re-strategize how we’re going to move this forward…we’re being blocked by one of our own senators on this.  He’s not running for office again so he’s not really concerned with how that impacts him.”

Chief Sneed said they will get the bill through.  “The reality is that the land was promised to the Eastern Band to be put back into trust back in the 80s.  So, we’ll go up and remind members of the Senate that this is just about keeping a promise.”

Sen. Burr’s office did not return a One Feather request for comment by press time.

The Act was submitted by Rep. Charles J. Fleischmann (R-Tenn.) on Jan. 3, 2017, the first day of the 115th Congress.  Following passage by the House last April, he said in a statement, “Tonight, the House voted to keep a promise to the Eastern Band of Cherokee Indians by rightfully returning 76 acres of sacred land in Monroe County (Tenn.), putting the land back in tribal hands.  The Cherokee have a rich heritage in the Third District, and I am thankful to have played a part to ensure the story of the Eastern Band is preserved in the Cherokee towns of Chota and Tanasi, and allow our future generations to understand and appreciate the heritage of the Eastern Band in east Tennessee.”

According to information from the House Subcommittee on Indigenous Peoples of the United States (formerly the House Subcommittee on Indian, Insular, and Alaska Native Affairs), “The bill would place approximately 76 acres of Tennessee Valley Authority (TVA) land in Monroe County, Tenn., on the shores of the Little Tennessee River/Tellico Reservoir into trust for the benefit of the Eastern Band of Cherokee Indians.  Additionally, the bill places two permanent easements over TVA land to be held in trust.”

Two local leaders in east Tennessee expressed their support of the bill last year by writing a letter to Sen. Lamar Alexander (R-Tenn.).  In the letter, Monroe County Mayor Tim Yates and Loudon County Mayor Buddy Bradshaw state, “We believe it is most appropriate for you to sponsor a Senate resolution since the lands involved in the reacquisition are in Tennessee and job growth from the lands will be Tennessee jobs.  TVA has voiced no opposition to this action and will be compensated for any lost hydropower from future development of the lands.”

Chief Sneed testified at the then-House Natural Resource Subcommittee on Indian, Insular, and Alaska Native Affairs on Oct. 4, 2017 and stated, “This bill celebrates not only a time in Cherokee history when we lived in Tennessee, but also the return of the Cherokee people – as a modern, living people, with a living culture and language, and traditions that have survived from ancient times – back to Tennessee.”