The Cherokee Lady Braves are heading into February tournament and playoff time in second place in the Big Smoky Mountain Conference and ranked third in the latest Maxpreps 1A poll (Feb. 1).  They defeated Swain County 82-49 on Friday, Feb. 1 at the Charles George Memorial Arena. 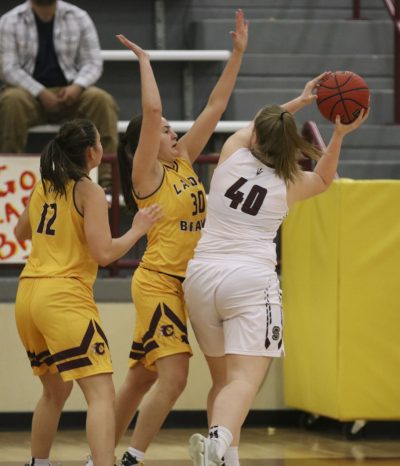 “We didn’t press a lot tonight, and we’re trying to work on our half-court man and just getting solid at it as we go forward because I felt like we had some gaps in our defense,” Chris Mintz, Lady Braves head coach, said after Friday’s victory.  “We still had some tonight, but we’re getting better at it and the last few games we’ve played pretty good defense.  That just makes our offense so much better because we’re really good on offense.”

He said the Lady Braves have been working on reducing their fouls.  “That helps out because the game isn’t so frantic and we can play a solid game.  Tonight, we didn’t get into foul trouble.  We had one girl with three fouls, and that keeps our starters being able to play and that is benefitting us.”

Deante Toineeta, Lady Braves sophomore, led Cherokee with 17 points on the night.  Cherokee got going fast in this game and led 24-9 after the first period and 45-27 at the half.  A huge third period for the Lady Braves in which they outscored Swain Co. 25-5 sealed the game as they’d go on for the 82-49 win.