Most communities in the United States are facing issues related to substance abuse and drugs. Tribal leaders and officials of the Eastern Band of Cherokee Indians joined with tribal members at the Chief Joyce Dugan Cultural Arts Center on the night of Thursday, June 28 at an Emergency Town Hall Meeting to discuss the issue, but more importantly to discuss solutions.

“Communities all across the country are dealing with this and very few have any solutions at all,” said Chris McCoy, EBCI Communications manager, who moderated Thursday’s event which was called by Vice Chief Alan B. Ensley.

“I wanted to call this town hall meeting to address the drug issue,” Vice Chief Ensley said at the beginning of the meeting.  After the last per cap check, we had 11 individuals OD (overdose) in one day.  The following Monday, I started getting phone calls, and I told my staff I don’t know if there’s anything I can do, but I wanted to get everybody in the same room to talk about the issues.”

He went on to state, “There’s no easy fix for this problem.  There’s no silver bullet because if there was, we would have fired already.  It’s going to take a lot of love for these people in recovery.”

Chief Sneed said early childhood prevention and preventative efforts in general are the key.  That, plus compassion.  “We have to have a mindset that we will reintegrate these people back into our community.”

She said many have endured severe trauma in their lives from various forms of abuse and begin to self-medicate.  Saylor commented that people in the throes of substance addiction often make irrational and poor decisions regarding family and other aspects of their lives.  “Their brains are hijacked.”

Anthony Sequoyah, Chief of Cherokee Tribal EMS, told the crowd that from Jan. 1 of this year to Thursday night, his program has received 171 substance abuse calls and over 100 Narcan kits have been left at homes to help prevent overdose deaths.  He noted that in 2017 there were a total of 285 calls. 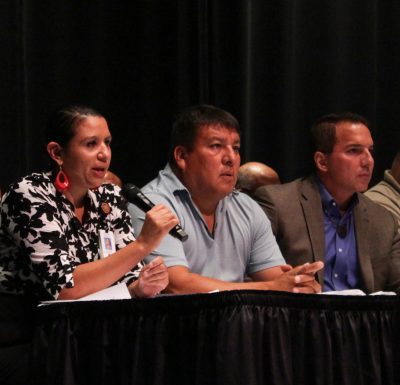 “We’re dedicated to our community and we’re all in to help deal with this problem,” said Sequoyah.

McCoy told the crowd that all ideas are welcome.  “There isn’t a single answer that’s going to solve this.”

Vickie Bradley, EBCI Secretary of Public Health and Human Services, spoke about the Tribe’s recent harm reduction program involving a needle exchange initiative.  She said there are currently 812 diagnoses in the community of HepC with 414 being deemed “infectious”.

The harm reduction program is designed to curb that rate, and she noted it is the only proven system to do so.  “It has proven its effectiveness in many studies from the World Health Organization, the Centers for Disease Control, the American Medical Association, the American Public Health Association; I could go on and on.  There has been a lot of controversy about the syringe services program.”

Secretary Bradley said there is a misconception that all the program does is hand out needles.  “That is not what we do at all.  The purpose of the syringe services program is to reduce the transmission rates of HIV and other diseases such as Hepatitis C as well as connecting people to treatment and other important needs such as housing, food assistance, and social services…syringe exchange programs are shown to lead to a 66 percent reduction in needle stick to law enforcement.”

He added, “This spirituality is a gift for the people.  You can’t purchase it.  It is given to you.  Once you accept it, it no longer belongs to you.  It belongs to the next person who comes through the door.”

Shantelle Smith, an EBCI tribal member from the Yellowhill Community, has been sober for 23 years.  She found help with her substance issues through a support group.  “I didn’t have anybody in my life who didn’t party.  I started partying when I was 12.”

Jatanna Feather, an EBCI tribal member who also has Navajo and Sioux heritage, became addicted to narcotics she was prescribed following a lupus diagnosis.  She found help in a safe house program on the Navajo Nation in New Mexico that helped with job placement and other life services.

Feather thinks that type of program would work in Cherokee.  “My suggestion would be having a place that is 24-hours a day where someone can go and be sober…have a place where they can go and be calm and people can help them.”

Lea Wolf, an EBCI tribal member, suggested a return to a more traditional style of community.  “We need to remember who we are.  The system that we had until 1492 worked for us.  I’m not saying Drug Court is bad, but we need to hold ourselves to a higher standard.”

Frank Dunn, an EBCI tribal member from the Wolftown Community, noted that to gain employment with the Eastern Band of Cherokee Indians or Harrah’s Cherokee a person has to pass a drug screening.  “To get a per capita check, you should have to be drug-tested.”

He also inquired about forming a drug task force.  Chief Sneed related that a resolution will be coming before Tribal Council in the July regular session calling for the formation of such a task force.

Jody Taylor, an EBCI tribal elder from the Birdtown Community, said it will take a community-wide effort to solve the issues.  “We’re all in this together.  We’re all Cherokee.  We take care of our own people.”