The tribal government of the Eastern Band of Cherokee Indians wants to have better engagement with the business community of Cherokee.  That message rang through at an event, called “Breakfast with the Chief”, which was held at Harrah’s Cherokee Casino Resort Locust Room on the morning of Thursday, June 28.

“I used to tell my students all the time that every American should own their own business at least once, for at least one year,” Principal Chief Richard G. Sneed, a former small business owner and teacher, told the business owners gathered for Thursday’s event.  “It will change your entire perspective of how the world works.  And, it really does because the idea that someone else, somewhere else, owes you something does not exist in the world of the small business owner.  In my mind, entrepreneurship is empowerment.”

He added, “I have tremendous respect for anyone who is a risk-taker and who steps into the unknown and the world without a safety net of being a small business owner.  Thank you, and I applaud your efforts.  I’ve been there, and I know it’s tough.  When you’re the owner, you’re everything.  You’re the complaint department.  You’re the HR department; you’re everything.” 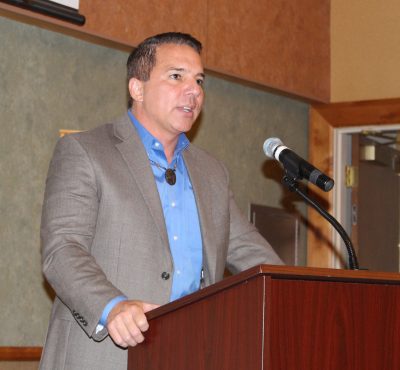 BUSINESS: Principal Chief Richard G. Sneed speaks at the opening of an event, “Breakfast with the Chief”, which was a meeting hosted for business owners in Cherokee at the Harrah’s Cherokee Casino Resort Locust Room on the morning of Thursday, June 28. (SCOTT MCKIE B.P./One Feather)

Chief Sneed said discussions have been had as to having quarterly meetings of the Cherokee Chamber of Commerce, possibly in a location such as the Cherokee Phoenix Theater, due to the fact that the Chamber does not currently have a physical location.  “I certainly want to hear from you and what your needs are and how we can help support your efforts and what you’re doing.  We want to work with you and not against you.  As long as I am in office, you will have my full support.”

EBCI Secretary of Commerce Paula Wojtkowski gave a presentation on the Tribe’s latest CEDS (Comprehensive Economic Development Strategy) and commented, “Our cultural uniqueness is the cornerstone of our destination marketing strategy.”

She noted that some future projects might take more out-of-the-box thinking.  “We’ve got to begin to think about the property that sits just off of the Boundary.”

Wojtkowski spoke of the Division of Commerce’s goals and objectives, “As a collective, not only are we charged with vetting a lot of different economic opportunities that come forward on behalf of the Tribe…but, we also have to understand and keep mindful that we are the stewards for 16,000 people with the budgets that we spend and the actions that we take, and we are very serious about that.  We want to make sure that the things that we bring forth are things that the business community and our local community can be very proud of.”

Mike Parker, EBCI Destination Marketing director, agreed and commented, “There has to be a balance between the stuff for the adults and the stuff for children.”

Wojtkowski said future attractions being looked at for Cherokee, such as the proposed Adventure Park, are family-friendly.  She also spoke of an idea for a cultural corridor featuring Cherokee art, history, culture, and more.  “The cultural district should be the heartbeat of the community.  It should be as much for the local tribal member as for the visiting public.”

The issue of pedestrian traffic in the downtown area and current cultural district was discussed.  Grant said jokingly, “I’ve been all over the world, big cities, small cities, and Cherokee is unique.  It’s unique because it only has one sidewalk.”

Several business owners commented on the lack of pedestrian walkways downtown, and Wojtkowski noted, “It is dangerous to cross the street there.”

She added that preliminary ideas have been discussed to possibly add more greenspace to the downtown area and more pedestrian walkways by removing two of the four traffic lanes.

“Our goal is to really drive overnight destination,” said Rob Young, Element Advertising media and research director.  “While we certainly don’t want to turn away day-trippers, we want to get people to come over and stay two to three nights.  Because, as we all know, the longer they stay, the more experience they’ll have and the more money they’ll spend.  We also want to promote the many great events that take place in Cherokee throughout the year as well as the opening of the cultural attractions and fishing season.”

Young noted that, according to 2017 numbers, a total of 87 percent of people visiting Cherokee last year stayed overnight.  He said the average group coming to Cherokee spent $773 per stay including $189 in lodging.

“Our website (www.visitCherokeeNC.com) is our most powerful community tool,” Young said.  “So, we place a lot of advertising with the goal of driving people to the website where they can find information on restaurants, lodging facilities, the cultural attractions, events, fishing tournaments; just about anything anyone would want to know about Cherokee.”

At the end of the morning’s event, Wojtkowski told the business owners that she and others in tribal government are looking forward to working on the relationship.  “We want to hear your concerns.  We want to be a good partner.”