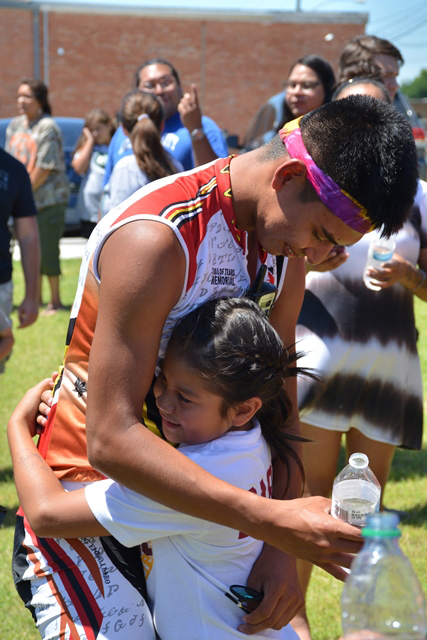 TAHLEQUAH, OKLA. – Cyclists from the 2018 Remember the Removal Bike Ride arrived in Tahlequah Thursday, June 21 finishing their three-week trek that retraced the northern route of the Trail of Tears.

The ride started on June 3 in New Echota, Ga., the former capital of the Cherokee Nation prior to forced removal to present-day Oklahoma. Cyclists from the Cherokee Nation and the Eastern Band of Cherokee Indians rode nearly 1,000 miles through portions of seven states.

The Cherokee Nation held a return ceremony at the tribe’s new Cherokee National Peace Pavilion in downtown Tahlequah on Thursday, where tribal leaders, friends and family gathered to greet the returning cyclists.

“These Cherokee men and women have honored our ancestors by riding hundreds and hundreds of miles from New Echota, Georgia, to the Cherokee Nation capital in Tahlequah, Oklahoma,” said Principal Chief Bill John Baker. “Along the way they have formed new bonds with fellow Cherokees, gained a deeper understanding of what their ancestors endured, and faced their own personal adversities only to defeat them, because that’s what Cherokees do. I am so proud of the 2018 Remember the Removal cyclists and what they have accomplished.”

The original Remember the Removal Bike Ride was held in 1984, and in 2009 the leadership program resumed. Each year cyclists learn about Cherokee history, language and culture while gaining a deeper understanding of the hardships faced by their ancestors who walked the Trail of Tears.

“I participated in the bike ride because I wanted to know where I come from,” said Cherokee Nation citizen and 2018 Remember the Removal cyclist Lily Drywater, of Tahlequah. “Being Cherokee is a huge part of my identity, and the removal is a huge part of our history. I wanted to learn how resilient my ancestors were and to further realize how strong I am.”

During the journey from Georgia to Oklahoma, Remember the Removal Bike Ride participants visited historical landmarks that were important to Cherokee people, including Blythe Ferry in Tennessee, which was the last part of the Cherokee homeland walked by the ancestors before beginning their journey into Indian Territory. They also visited Mantle Rock in Kentucky, which provided shelter to many Cherokees as they waited for safe passage across the frozen Ohio River.

This year, Cherokee Nation Businesses Executive Vice President Chuck Garrett, an avid cyclist, also joined the Remember the Removal cyclists during a portion of the ride.

“This ride personifies the experience of pain and self-doubt, but this team rallied around each other and pushed forward,” Garrett said. “That is something to be proud of not just today, but for a lifetime.”

Of the estimated 16,000 Cherokees forced to make the Trail of Tears journey to Indian Territory 180 years ago, around 4,000 died due to exposure to the elements, starvation and disease.