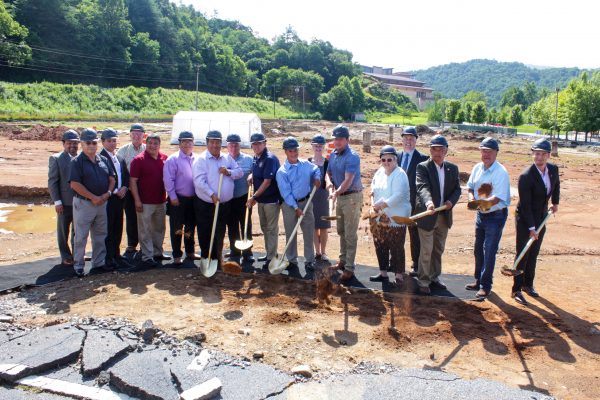 The previous expansion at Harrah’s Cherokee Casino Resort in 2013 was dubbed a “masterpiece”, and now tribal and gaming officials of the Eastern Band of Cherokee Indians are expanding the canvas and adding more amenities to the property.  Ground was broken on the morning of Tuesday, June 26 on a new Convention Center that will include 83,000 square feet of conference space and a fourth hotel tower.  The project is expected to take 30 months to complete.

“The groundbreaking of this convention space and this project really just represents the first phase of economic diversification and many projects to come,” said Principal Chief Richard G. Sneed who noted that the property has a convention center area now, but it is very small in comparison.  “This is an industry that literally generates hundreds of billions of dollars a year, and we have something so unique, here in Cherokee, to offer.  We have our culture.  We have our story.  We have these beautiful mountains that surround us, and I believe this is going to be a destination of choice for many conventions for years to come.”

He added, “We, as tribal leadership, must continue to look toward the future, and we must understand that the decisions we make today are going to impact our people for generations to come.  And so, I applaud the decision-making from the Tribal Council in support of this project.”

Tribal Council approved Ord. No. 567 (2016) last August that gave TCGE (Tribal Casino Gaming Enterprise) authority to enter into the Fifth Amended and Restated Loan Agreement with Wells Fargo Bank for the funding of the project including a $250,000,000 delayed draw term loan facility for the construction of the expansion. 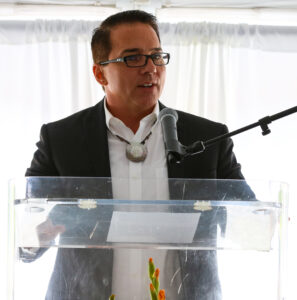 GENERATIONS: Principal Chief Richard G. Sneed speaks during Tuesday’s groundbreaking ceremony in which he said, “We, as tribal leadership, must continue to look toward the future, and we must understand that the decisions we make today are going to impact our people for generations to come.”

“The impact of the revenue generated from this project, and similar projects such as the Adventure Theme Park, will ensure that our Tribe will have the ability to continue to provide privileges, the opportunities, the services, and most importantly, the employment opportunities for our people that exist today and will be here for generations to come,” said Chief Sneed.  “Projects such as this, and the revenue generated, provide services for our people – housing, health care, higher education, orthodontics for our children; all of these programs and services that we are so blessed to be partakers of.  We, as leadership, both on the political side and on the commercial side, have to continue to look toward the future and understand that we have a responsibility to future generations.”

“It is very exciting to know that we are about to build a fourth hotel tower, convention center, exhibition hall, and additional parking spaces that are badly needed,” said Brooks Robinson, Harrah’s Cherokee senior vice president and general manager, who thanked tribal leaders and officials for helping with the project.  “Without your help and your support, we could not make this project happen.  So, thank you very much on behalf of all 3,600 employees with the TCGE.”

Robinson spoke of the need for the Convention Center saying that they turn away hundreds of requests for convention space annually.  “With the additional space, we will be able to host concerts, convention groups, trade shows, events; all of these at the same time.  We will now have the ability to have multiple things going on at the property, but not just on property, but in our community.”

He said the convention sales team from Caesar’s Entertainment, consisting of 130 regional and national sales managers in every major market in the country, will aid in booking events and conventions at the new center.  “We are going to take a very aggressive approach with this…this team will be dedicated to helping us sell every square foot of space that we have available.”

New job opportunities will also be available once the center is open.  “It’s going to take a lot of people,” said Robinson.  “We plan to hire between 300 to 400 employees, and when we open, we will be pushing close to 4,000 employees that work at this property and at Valley River in Murphy.” 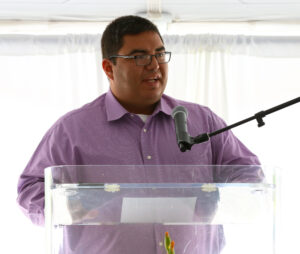 FUTURE: Tribal Council Chairman Adam Wachacha speaks during Tuesday’s event which he called a great day for the Eastern Band of Cherokee Indians.

Tribal Council Chairman Adam Wachacha said the idea for a convention center has been around since the late 1990s.  “It’s taken awhile to get here, but it’s here, and we’re glad it’s here.  I appreciate the previous Tribal Councils, the TCGE, Harrah’s Casino, and all of the hard work that has been put into this project.  Today is truly a great day for the Eastern Band of Cherokee Indians.”

He added, “When we look at projects, one of the sayings is, ‘we look at seven generations ahead’, so, my grandkids and their grandkids hopefully will have something truly to work toward and look forward to and look to the future.”

Jim Owle, TCGE chairman, noted, “I just want to say thank you to Tribal Council.  I’d like to give you guys a hand again because without any of this, none of these projects would ever go.”

Greg Hnedak is the founder of Dreamcatcher Hotels, the firm chosen to head the development of the convention center project.  The firm, based in Memphis, Tenn., has worked on various projects throughout the region including the Seven Clans Hotel for the Coushatta Tribe in Kinder, La.

“On behalf of the Dreamcatchers Hotels, I would like to thank the Tribal Casino Gaming Enterprise for their confidence and, most importantly, their trust in selecting us to lead this development – a very milestone project,” said Hnedak.  “I say milestone because this resort, with all of its continued success, will now add regional convention as a new attraction to a relatively new and larger customer base.”

The expansion will also include retail shopping space, but the exact nature of that has not been determined yet. 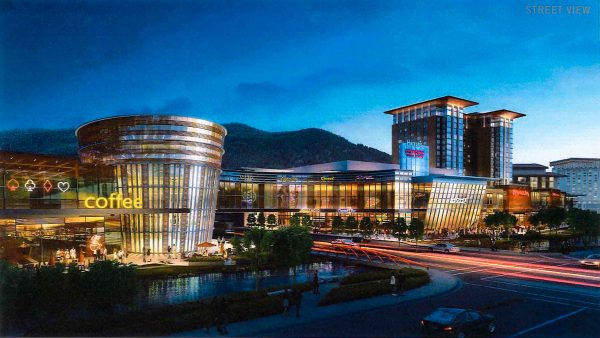