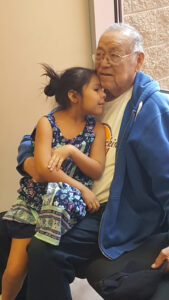 Henry Queen, 83, of Cherokee, passed away on Thursday, June 21, 2018 at his residence after a long illness.

Henry was a retired veteran of the U.S. Army.  He was a loyal Cherokee Braves fan.  He loved to play stickball for the Wolfetown Community and absolutely loved watching his grandbabies playing sports!  He loved his Momma-Doo!