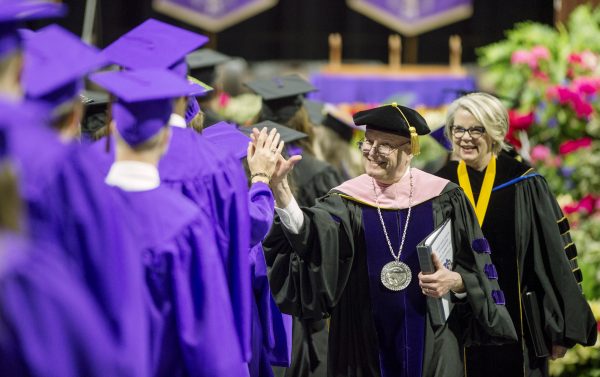 CULLOWHEE – The Western Carolina University community is mourning the loss of Chancellor David O. Belcher, who died Sunday, June 17, at the age of 60 after a more than two-year battle with brain cancer.

WCU’s chancellor since 2011, Belcher was widely recognized for energizing the university community to work with regional leaders to serve the needs of Western North Carolina, a combined effort that resulted in WCU reaching all-time highs in student achievement, enrollment, retention and graduation rates, in student and alumni engagement and in philanthropic giving.

Belcher, who went on medical leave Dec. 31, 2017, had been battling brain cancer since April 2016. He underwent surgery to remove a glioblastoma brain tumor in May 2016, followed by an 11-month treatment plan that initially seemed successful. But in early August 2017, he informed the WCU campus that he had experienced a recurrence of the cancer and, in late November 2017, announced his plan to go on medical leave at the end of the calendar year with no plans to return to his position.

Belcher’s legacy at WCU includes support and implementation of two pivotal statewide initiatives that are expected to greatly enhance public higher education in WNC – the NC Promise tuition program that dramatically lowers student college costs, and his efforts toward the successful passage of the Connect NC bond, which included $110 million in funding for WCU’s Apodaca Science Building, a state-of-the-art facility that will prepare students for 21st-century professions in the science, technology, engineering and mathematics fields.

In addition, his support for the consolidation of WCU economic growth-oriented graduate and undergraduate programs at a new instructional site in Asheville represented an unprecedented strategic investment in economic development opportunities for the WNC region.

Plans are in the works for a memorial service to be held on the WCU campus. Details will be announced when they become available.

News of Belcher’s death has resulted in an outpouring of statements of grief, admiration and appreciation from across the WCU community and University of North Carolina System.

Margaret Spellings, president, UNC System: “David Belcher’s passion, integrity and vision have forever shaped and strengthened the university that he loved so much. David’s fierce belief in Western Carolina University’s ability and responsibility to change the lives of students and transform the region it serves inspired the Catamount community, and it inspired me. My thoughts and prayers are with his wife, Susan, whose own unfailing support and passion for WCU continues, in part through the Belchers’ heartfelt and significant personal gift towards Catamount student scholarships.”

Louis Bissette, chair, UNC Board of Governors: “North Carolina has lost an incredible public servant and a great advocate for higher education. David Belcher was one of most inspiring leaders in higher education that I have ever encountered. As a longtime resident of Western North Carolina, I have a deep and abiding appreciation for the work he did on behalf of the mountain region and for Western Carolina University. My thoughts are with his family and friends during this time.”

Patricia Kaemmerling, chair, WCU Board of Trustees: “Today, we are heartbroken. David Belcher, my friend and our chancellor, was a truly inspiring leader with an uncanny ability to touch the soul of everyone he met. With his razor-sharp wit, his intense focus on the pursuit of excellence and his abounding love for students, David re-energized our Western Carolina University community. If you had the chance to know him, you admired him. If you had the opportunity to work with him, you respected him. If you had the honor to call him friend, you loved him. He brought us leadership, which made us stronger. He brought us transparency, which instilled us with trust. He brought us music and laughter, which gave us joy. His stamp will forever be on this campus, in this region and in our hearts. As we all mourn the passing of our friend, our colleague and our leader, please save a special thought for Susan Belcher and other members of the Belcher family as they grieve this unimaginable loss. We are especially thankful to them for sharing David Belcher with us for these past seven wonderful years.”

Brian Railsback, chair, WCU Faculty Senate: “As chair of the Faculty Senate, working with David Belcher reminded me how knowledgeable he was about how the university works at all levels. When we were working on funding several major Faculty Senate initiatives, his advice on how to get from A to Z was genius. He made my job much easier. His incredible administrative skill might have been easy to miss because he made it look so easy and because his huge personality, artistry and humanity shined so brightly.”

Mandy Dockendorf, chair, WCU Staff Senate: “Dr. Belcher’s tenure marked a deeply positive shift in employee morale and engagement. He showed us what one person working with purpose and a generous spirit could accomplish. He made us feel like we were valued and that our work made a difference. Under his leadership, WCU came together as a community with pride of place. Dr. Belcher’s enthusiasm and energy was infectious; after hearing from him, you couldn’t help but to aim higher, work harder and give more. He led by example, not only giving back to university scholarships but also pouring his heart and soul into WCU students, staff and faculty. His legacy is the renewed sense of dedication we each have for WCU and our community. Dr. Belcher left us too soon, but our days are brighter and more purposeful for having known him. We will keep his legacy of excellence and generosity alive here at WCU.”

Katherine Spalding, president, WCU Student Government Association: “Chancellor Belcher never failed to make the student voice the loudest in the room. He will forever be in our purple and gold hearts, and remembered for leading this institution into a new era. He will be missed as more than just our chancellor, but also our friend, cheerleader and hero.”

Robin Parton Pate, president, WCU Alumni Association: “Alumni across Catamount Nation are heartbroken over the loss of our beloved and legendary leader, Chancellor David Belcher. His inspirational passion, love for WCU and the people it serves, and inclusive leadership has positively transformed our university and the region. There is a renewed sense of pride among alumni as a result of his tenure at WCU, which was characterized by a unique ability to motivate others and empower them to thrive under his leadership. We are forever grateful for his vision, dedication and the lasting impact he and Susan have made in the lives of our students, community and alumni.”

Prior to his appointment at WCU, Belcher served at the University of Arkansas at Little Rock from 2003 until 2011 as provost and vice chancellor for academic affairs, and at Missouri State University from 1988 until 2003, first as coordinator of keyboard studies in the Music Department (1989-1992), then as assistant dean (1993) and dean (1994-2003) of the College of Arts and Letters.

Known as a champion of public service, Belcher served on key boards of directors, including the My Future NC Commission on state educational attainment, the NCAA Division 1 board on intercollegiate athletics, the North Carolina Arboretum and the Winthrop Rockefeller Institute in Arkansas. He also was the founder and five-year director of the statewide Missouri Fine Arts Academy.

A native of Barnwell, South Carolina, Belcher was predeceased by his parents, Jean Orr Belcher and Posey Belcher Jr. He was a 1975 graduate and valedictorian of Barnwell High School and earned his bachelor’s degree from Furman University in 1979, master’s degree from the University of Michigan in 1981 and doctorate from the Eastman School of Music at the University of Rochester in 1989, all in piano performance. He studied in Vienna, Austria, for two years, funded in part by a Rotary Foundation Graduate Fellowship.

Belcher was regarded as a passionate and committed believer in the power of education. His message – “We are in the business of changing lives” – became both an inspiration and a challenge to those sharing his commitment. He enjoyed travel to experience new cultures, and was an avid gardener. Many remember his infectious laugh, quick wit and energetic leadership style.

Susan Belcher extends her thanks to family, friends and colleagues for their caring support, as well as the medical teams of Duke University Medical Center and Cancer Care of WNC.

In lieu of flowers, the Belchers request that memorials be directed to the foundation endowments of Western Carolina University, Furman University, the University of Arkansas at Little Rock and Missouri State University.