Study finds older use of tobacco than previously thought

A study into the use of tobacco has yielded some interesting findings including dating the practice to around 4,000 years ago – about 1,500 years older than previously thought.  The study, “Evidence of Tobacco from a Late Archaic Smoking Tube Recovered from the Flint River site in southeastern North America”, has been undertaken by various researchers and was led by Dr. Stephen B. Carmody , Troy University (Ala.) assistant professor of anthropology.

“For the past eight or nine years, I have been exploring pipe use, pipe-smoked plants, and the use of tobacco here in the eastern woodlands of North America,” said Dr. Carmody.  “We have made several interesting finds.  Until recently, the earliest evidence for the use of tobacco was discovered in a pipe that was approximately 2,500 years old, dating to what we refer to as the Early Woodland Period.”

He added, “One of my great interests has always been the disconnect between this evidence and the appearance of pipes in the archaeological record much earlier.  Recently, myself and a group of researchers tested a pipe that is much older, dating to the Late Archaic Period, and it tested positive for nicotine.  This find pushes tobacco use back almost 1,500 years and into a time period when we see people first starting to domesticate other plants.” 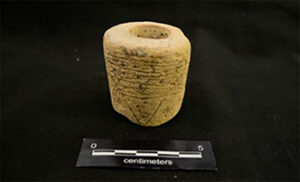 STUDY: Shown is a pipe which was found at the Flint River archaeological site in northern Alabama in the 1930s. It is the subject of a new study that puts the use of tobacco in the Americas at around 4,000 years ago, much older than previously thought. (Photo contributed)

Dr. Carmody stated the research team has analyzed pipes in North Carolina, Tennessee, Alabama, Georgia, Arkansas, and Mississippi.  “The detection of nicotine in a Late Archaic smoking tube was recovered from the Flint River Archaelogical site,” he noted.  “The age of the artifact was established by radiocarbon dating of contemporaneous deer bone collagen which sets the age of the smoking tube at 1685 – 1530 BC.  As nicotine is a biomarker for tobacco, this resets the arrival of tobacco in North America by at least a millennium earlier than previous studies would indicate.”

According to the paper, the researchers tested 36 pipes from 22 sites.  The Flint River site, where the pipe which is the main subject of the paper was found, is in northern Alabama where the Flint and Tennessee Rivers come together.  The pipe itself was actually unearthed by Tennessee Valley Authority archaeologists sometime between June 1938 and December 1939 prior to the area being submerged several years later due to the damming of the Tennessee River.

On the relevance of the findings from the study, the paper states, “This significant discovery adds to our archaeological understanding of the late Archaic period in the Eastern Woodlands.  And, while this provides clarity to questions surrounding the timing of tobacco’s adoptions and diffusion through the region, questions remain about which species of tobacco was first adopted and how the plant’s cultivation contributed to changing subsistence practices in the region.”

In the acknowledgements section of the paper, the researchers wrote, “We would like to thank the Eastern Band of Cherokee Indians for their financial support of this research project.  Funds for the C dates were provided by the University of Tennessee, Knoxville and Jan Simek.  Additional support was provided by a Rhodes College Faculty Development Grant.  We would also like to thank members of the University of Alabama’s Office of Archaeological Research for supporting our research by providing time, labor, and access to collections.  We also thank James Cizdziel and Karen Mosely for their assistance in the analysis of the artifacts, and two anonymous reviewers whose suggestions improved the manuscript.”