Cherokee High School rising senior Juanita Paz-Chalacha is one step closer to her dream of becoming a professional musician. She has been selected to spend her senior year at the University of North Carolina School of the Arts (UNCSA) in Winston-Salem.

Paz-Chalacha will be one of 60 flutists accepted to complete a rigorous study of instrumental music as she lives and learns in the creative community at UNCSA. She is the daughter of Joel and Rebecca Paz-Chalacha of Cherokee.

In addition to being immersed in training in the arts through a music conservatory experience at UNCSA, Paz-Chalacha will have the opportunity to expand her academic achievement by taking AP (Advanced Placement) academic courses in such subject areas as English, mathematics, science and social studies. Academic subjects at UNCSA are infused with discussions of the arts and the role of the arts in society. 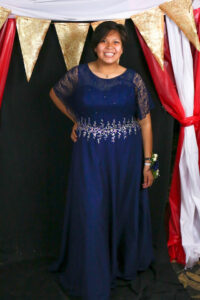 MUSICIAN: Cherokee High School rising senior Juanita Paz-Chalacha has been selected to spend her senior year at the University of North Carolina School of the Arts (UNCSA) in Winston-Salem. (Photo courtesy of Cherokee Central Schools)

Throughout her time at the School of the Arts, Paz-Chalacha will perform in small recitals as well as elaborate productions as she is guided by faculty mentors and staff trained to understand and meet the unique needs of young artists.

Students may choose to continue their studies at UNCSA after earning their high school diploma and pursue Bachelor of Fine Arts degrees in a variety of schools, including Music, Dance, Film, Drama, and Design and Production. In addition, the top ranked School of Design at UNCSA now offers a three-year graduate degree program.

Paz-Chalacha has dreamed of becoming a professional musician for several years and researched many opportunities for playing in an orchestra as well as requirements for attending UNCSA.

During a day spent visiting Vanderbilt University with her TaG (Talented and Gifted) peers in February, Paz-Chalacha gained a special one-on-one tour of Vanderbilt’s Blair School of Music, where she was able to observe the school’s orchestra in practice.

She received two private lessons per week from CCS Band Director Kurt Hotelling during the past school year, including instruction on her audition pieces and playing of duets.

According to Hotelling, “Part of her success rests with the excellent artist-level flute purchased for her by the School Board, Qualla Housing, Chief, and Vice Chief’s offices.”

He refers to this flute as “the best instrument for the superior musician.”

To earn admission to UNCSA, Paz-Chalacha traveled to Winston-Salem in early March to audition by playing an advanced flute concerto by Mozart before a review committee at UNCSA.  Only 10 of the 60 student flutists auditioning, including college-level musicians, gained admission to UNCSA.

Paz-Chalacha’s advice for other students seeking advanced learning in special interest fields is, “No matter how difficult your goal may be just go out and do it, and see what happens.”

Hotelling notes that for her audition, “Juanita spent five months learning and practicing the necessary music which included the concerto, a solo flute piece by J.S. Bach, which she performed at the CCS Christmas Concert, and the prerequisite scales and keys.  I am extremely proud of her accomplishments and will be following her senior year of high school, and, if she chooses to pursue a professional career, I will be following her college years with keen interest and enthusiasm as well.”

Paz-Chalacha, is a well-rounded academic student who excels as much in online honors math classes from North Carolina Virtual Public School (NCVPS) as she does in music. She received TaG (Talented and Gifted) services through most of her schooling at CCS. In addition, she participated in Close Up activities sponsored by CHS Social Studies teacher Heath Robertson.

“Juanita is everything a teacher could ask for in a student,” said Robertson.  “She is a hard worker and has a natural curiosity for learning. She will be a tremendous asset to NCSA.”

Last fall, she joined Native American high school students from across the country for a focus on science as she participated in an AISES (American Indian Science & Engineering Society) convention and national conference in Colorado.

Aside from music, Paz-Chalacha has a special interest in epidemiology and entertains thoughts of pursuing a double major in both music and epidemiology in college.

“Juanita is a very determined student with high expectations for herself,” said TaG teacher Dr. Beverly VanHook. “She exhibits an eagerness to learn and to teach others. I remember the first year Juanita was in high school, she volunteered to tutor math students in middle and elementary school at Cherokee to help them prepare for the NC end-of-grade tests. She is determined to be successful herself and to help others become successful as well.”