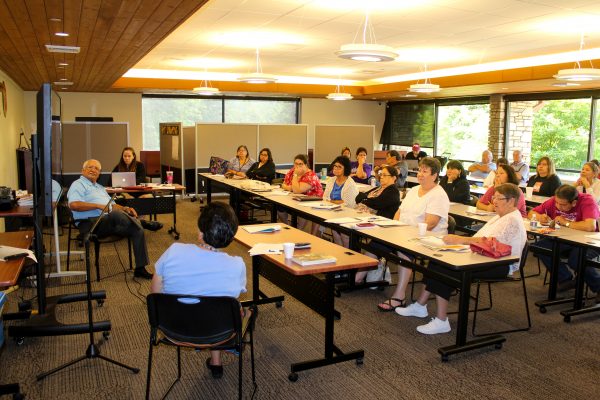 SPEAKERS: A state bill, signed into law on Wednesday, June 13, paves the way for Cherokee speakers, such as those pictured here at the Cherokee Language Consortium at New Kituwah Academy on the morning of Thursday, June 14, to go through a process and test to become certified Cherokee language teachers. The Eastern Band of Cherokee Indians will enter into a memorandum of understanding with the State Board of Education to develop that process. (SCOTT MCKIE B.P./One Feather)

A double-faceted bill passed the North Carolina General Assembly on Monday, June 11 that will be a game-changer for the way fluent Cherokee speakers work in the classroom to teach their language.  House Bill 92, introduced in February 2017, passed 113-0 on Monday and states “the State Board of Education shall enter into a memorandum of understanding (MOU) with the Eastern Band of Cherokee Indians specifying the criteria that must be met in order for individuals to teach Cherokee language and culture classes”.  Governor Roy Cooper signed the bill into law on Wednesday, June 13.

“This is the direct result of the work we did in Raleigh a few months ago, and our efforts are paying dividends!” said Principal Chief Richard G. Sneed.  “Thanks to the members of Council that traveled to Raleigh with me and Vice Chief Ensley in support of this bill!”

Renissa McLaughlin, EBCI Education and Training director and former KPEP (Kituwah Preservation and Education Program) director, has worked on this initiative for almost a decade.  “It is intended to assist those public schools that wanted to have Cherokee language teachers certified so that it didn’t impact them negatively.”

Throughout the process, she has worked with Dr. Hartwell Francis, KPEP education curriculum developer, who worked formerly with the Western Carolina University Cherokee Language Program.  “What the process does is it stabilizes regional school system’s employment process so they can hire a teacher as a teacher instead of hiring somebody who is going to work with a teacher.  At Swain (County High School), the teacher had to work with a professionally-certified Spanish teacher to have a Cherokee language class.  So, you ended up having two teachers in the classroom.  This can create a little bit of conflict if their teaching styles are a little bit different.”

McLaughlin said they have done their homework and are ready to hammer out the MOU immediately.  “This entire process isn’t just shooting blindfolded.  It’s structured.  It follows guidelines.  We have worked with NCDPI (North Carolina Department of Public Instruction) and ACTFL (AMerican Council on the Teaching of Foreign Languages), so it is a legitimate testing instrument.”

Both McLaughlin and Dr. Francis agree that teaching the Cherokee language is much different than teaching other languages such as Spanish or French.

“When we met with ACTFL, they brought people down that normally coach or mentor people, the proctors, in Spanish, and there was such a disconnect,” said McLaughlin.  “Those romance languages and English, they’re flat.  Cherokee is a multi-dimensional language.  Because of the uniqueness of the language it is really hard to take the square, which is modern education today and the instruction of languages, and then Cherokee language which is this holistic type of language where there are so many things and nuances to the language that don’t exist in any other language – time, ownership, shape.  There are five verb stems when you’re trying to ask for something.  It isn’t a flat language.  It’s a living language.”

Dr. Francis stated, “The Cherokee language is something different that is lived.  It’s a lived experience rather than a paper experience.  We’ll see a greater understanding in the community of what it means to learn the Cherokee language, and we’ll also be able to certify these people who’ve put in the time over the past 20 years teaching Cherokee language but have been disenfranchised by the system.”

McLaughlin said that while they have worked with various organizations over the years on this, those organizations are not the experts when it comes to the Cherokee language.  “It’s exercising our sovereignty – we’re the experts, the Tribe.  We’re the experts.  We need to own this test.  We will abide by the rules.  We’ve put it through the ringer, and we’ve come out with this product and we need to move forward with it.”

She added that having Cherokee language certified teachers in the public schools will raise the interest of non-Cherokee students and will help build bridges and relationships.  “That will, hopefully, build some awareness with those other students and have them gain a better appreciation of Cherokee history and culture.  It’s a ripple, and it’s going to be a ripple of good, positive relationships and raising new appreciation and awareness of the language in general.”

Dr. Francis noted, “The Tribe wants to create speakers in the community, not just people who know a little bit about the language or know some words in the language but actual speakers who can step into a classroom and teach social studies in the Cherokee language.”

The bill had another part which authorizes the state to issue an EBCI license plate to tribal members.  There will be no additional fee amount charged for these specialty plates, just the regular motor vehicle registration fees.  The plate can have a design and verbage designating it as an EBCI plate, but there is not a final design yet.