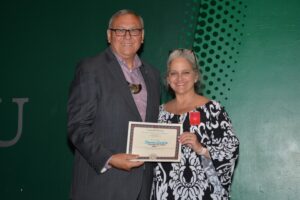 The sixth annual TOSS conference took place June 6-7 in Tahlequah at no cost to the 140 teachers who attended.

“Many schools don’t have the funding to send teachers to fee-based STEM trainings, so the Cherokee Nation is helping these classroom teachers by providing them with free resources,” Tribal Councilor Warner said. “It not only counts toward professional development hours and enhances learning, but also helps students down the line in their jobs and career paths.”

The tribe also awarded $10,000 total in Creative Teaching Grants to split among 10 teachers that can be used to start STEM projects in their classrooms in the coming school year.

“This grant is going to make it possible to make science different than what comes from the textbook,” Gordon said. “I am working on hands-on science experiments that involve butterflies and things that can get my students active in learning.”