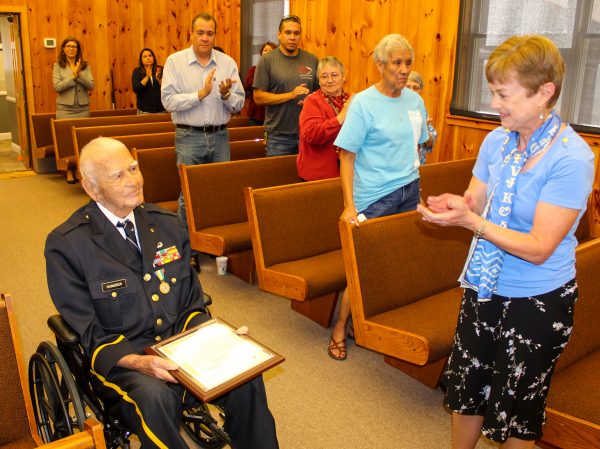 HERO: Beverly Elliot (right), a representative from Congressman Mark Meadows’ office, presents former Principal Chief and EBCI Beloved Man Robert S. Youngdeer with a plaque in the Tribal Council Chambers on the morning of Wednesday, June 6 that contains a Congressional Record of Chief Youngdeer that was read in the U.S. House of Representatives earlier this year. (SCOTT MCKIE B.P./One Feather photos)

Former Principal Chief Robert S. Youngdeer and the family of the late Dr. Jerry Wolfe were presented with Congressional Record plaques from Congressman Mark Meadows’ (R-NC) office in the Tribal Council Chambers on the morning of Wednesday, June 6.  Chief Youngdeer and Dr. Wolfe, both EBCI Beloved Men and World War II veterans, were honored as Beverly Elliott, a representative from Congressman Meadows office, read the Congressional Record decrees delivered by the Congressman previously in front of the U.S. House of Representatives.

Following the presentation, Merritt Youngdeer Sr., spoke on behalf of his father, “My father is very honored to receive this award this morning.  As the title of his book, ‘The Memoirs of Robert S. Youngdeer’, says, he is a proud Marine, a proud Chief, a proud American.  That best describes him.” 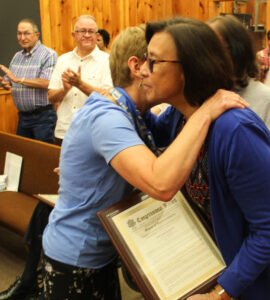 Elliott then read Dr. Wolfe’s Record which was read originally on May 20, 2013, “His service at the Museum is yet another testament to his lifelong commitment to service. Mr. Wolfe has been widely recognized for his dedication to cultural preservation.  He received the North Carolina Folk Heritage Award in 2003 and the Brown-Hudson Folklore Award from the North Carolina Folklore Society in 2010…I congratulate Mr. Wolfe on his lifetime of achievement and thank him for his service to the Eastern Band of Cherokee Indians and to our nation.”

Gerri Grady, Dr. Wolfe’s daughter, commented, “Father would have been greatly humbled, and we want to thank Congressman Mark Meadows for this action.  On behalf of the family, I want to thank you all (Tribal Council) for everything that you did for him, particularly in the last few months.  It meant a great deal to us.”

Vice Chief Alan B. Ensley said, “I want to thank the Congressman’s office for honoring these two great men who are members of the Tribe.”

SPEAKER: The late EBCI Beloved Man Jerry Wolfe is shown speaking at the Tri-Council meeting at Red Clay State Park on Friday, Aug. 28, 2015. He encouraged everyone to help save the Cherokee language and said, “Our true identity is our language. We must save our language and teach the youth coming along.” (SCOTT MCKIE B.P./One Feather photos)

He noted that Dr. Wolfe will be dearly missed by the Eastern Band of Cherokee Indians and noted that himself, Tribal Council Chairman, and Cherokee Co. – Snowbird Rep. Bucky Brown tried to fill in and call a stickball game recently in the Snowbird Community.  “It kind of embarrassed me as I’ve heard Jerry call so many stickball games,” Vice Chief Ensley said laughing.  “I thought, well Jerry would be mad at me the way I tried to call this ballgame.  I guess we all did such a bad job they were really thinking about Jerry…”

Big Cove Rep. Perry Shell said, “I think what is unique about these leaders is that they gave back – the whole time was giving back and sharing and doing for others, Gadugi; a life well-lived and representing the Tribe with honor and dignity and reflecting well on us.  It’s a testament to those in that generation, and it’s an example for us in this generation for their sacrifice and their commitment and their belief and their conviction and their honesty.”