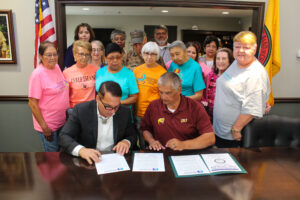 The EBCI Public Health and Human Services Family Safety and Senior Citizens Programs are commemorating World Elder Abuse Day by hosting a Walk to End Elder Abuse at Tsali Manor from 5 – 7pm on Friday, June 15.  This year’s theme is:  “Elders Matter:  We’re in this together…and together it works”.

Did you know that every day 10,000 people turn 65 in the US alone?  That trend is going to continue for nearly the next 20 years.  Demographics are shifting, and soon there will be more elderly people in the US than ever before.  At the same time that the population is growing, a startling number of elders face abusive conditions.  Every year an estimated 5 million, or 1 in 10, older Americans are victims of elder abuse, neglect, or exploitation. And, that’s only part of the picture: Experts believe that for every case of elder abuse or neglect reported, as many as 23.5 cases go unreported.

World Elder Abuse Awareness Day serves as a global call-to-action for individuals, organizations, and communities to raise awareness about abuse, neglect, and exploitation of elders. The International Network for the Prevention of Elder Abuse and the World Health Organization at the United Nations (UN) launched the first World Elder Abuse Awareness Day (WEAAD) on June 15, 2006 in an effort to unite communities around the world in raising awareness about elder abuse. WEAAD is in support of the UN’s International Plan of Action acknowledging the significance of elder abuse as a public health and human rights issue.