Apublic forum on hemp and its uses to provide pain relief was held at the Cherokee Indian Fairgrounds on the evening of Tuesday, May 29.  Hosted by Wolftown Rep. Jeremy Wilson, the meeting centered around a hemp by-product known as cannabidiol (CBD) and its uses.  The meeting was attended by approximately 15 community members.

“There is a big stigma around hemp and cannabis,” said Rep. Wilson at the beginning of the meeting.  “I want you all to be informed.”

He spoke about the growing drug problem in Cherokee. “We have a large opioid epidemic here…I do believe hemp is a good problem-solver for that.”

According to an article in Forbes magazine in December 2016, “In 2015, the market for consumer sales of hemp-driven CBD products was $90 million, plus another $112 million in marijuana-driven CBD products which were sold through dispensaries – bringing a total CBD market to $202 million last year.” 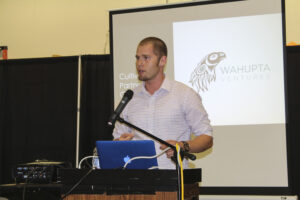 MEETING: Wolftown Rep. Jeremy Wilson speaks at the beginning of a Hemp Public Forum he organized at the Cherokee Indian Fairgrounds on the night of Tuesday, May 29. (SCOTT MCKIE B.P./One Feather)

Tuesday’s main presentation was by given by Wahupta Ventures, Inc., a Canadian-based firm that, according to its website, “is focused on the production and processing of hemp and creating key collaboration with sovereign Indigenous communities throughout North America”.

Other uses for hemp were discussed briefly such as its uses as food, skin care and beauty products, biofuel, and others, but the main discussion on the night was the uses of CBD.

“My focus is getting proper care for our people,” said Sam Anderson, a member of the Dauphin River First Nation and the managing director and a founder of Wahupta Ventures.  “It’s nothing new that our people use herbs as medicine.”

Anderson spoke of his issues with diabetes and noted, “I’ve been using that (CBD) for awhile, and my blood sugars are back to normal again…it’s been helping me out a good bit.”

Darnell Dinkins, a former NFL player who won a Super Bowl with the New Orleans Saints, is the director of business development for Wahupta.  “I see people struggling.  They’re looking for a version of relief.  This product that we’re talking about is natural.  It’s something that’s going to bring some type of relief to you.”

He related that CBD has helped him with pain relief following his football career.  “It truly will bring a balance to your body that will create relief.  It is helping me in various areas.”

Warren Cudley, Wahupta Ventures president and chief executive officer, said opioid use for pain has not worked.  “It was masking a problem, and it was creating a larger problem.”

Cudley said that hemp is a good rotation crop and takes only 120 days to mature from seed to plant.  “It takes nine times less water to grow hemp than it does cotton, and it’s a lot more beneficial for the land to grow hemp than cotton.”

He said that last year only 25,000 acres of hemp were grown in the United States.  “The world demand is astronomical.”

During the presentation, Cudley described the process Wahupta uses to extract and distill the CBD from the hemp plant.

In the presentation, Wahupta provides a business model containing yields and revenue for a business where the hemp flower is processed to CBD oil.  According to the model, if 20 acres were planted for such a venture, it would yield the following: 1,000 pounds per acre (flower); 2,000 total pounds of CBD oil produced; total oil extraction revenue – $18,120,000; total expenses for processing – $1,812,000; and net profits – $16,308,000.

During Tuesday’s meeting, Ernest Tiger, an EBCI tribal member, related that he is looking into the hemp business as well and questioned why an outside firm was being brought in.  He threatened legal action on the matter.

Mary “Missy” Crowe, an EBCI tribal member, spoke during the meeting and touted the use of medicinal cannabis that she used to help her through her numerous surgeries relating to a long battle with breast cancer.  “There is a stigma, but this works and it needs to be looked into.  It helped me to have a life.”

According to a press release from Wahupta, “CEO Warren Cudney confirmed that Wahupta has met with the Eastern Band of Cherokee Indians in both New Orleans and Las Vegas to discuss introducing hemp farming, cultivation, and building an extraction facility on their land.  The proposed 180-acre lot farming land is located on Cherokee Nation in North Carolina and would be the site for a world-class hemp production and processing facility.”

Cudney stated in that same release, “It would be an agreement that would allow them to own considerable shares within Wahupta and also charge us a tax from all revenue derived from farming and extraction, which is above and beyond taking dividends from shares in the profit.”

Staff from EBCI Communications was on site to record the meeting, but the recording was not online as of press time.