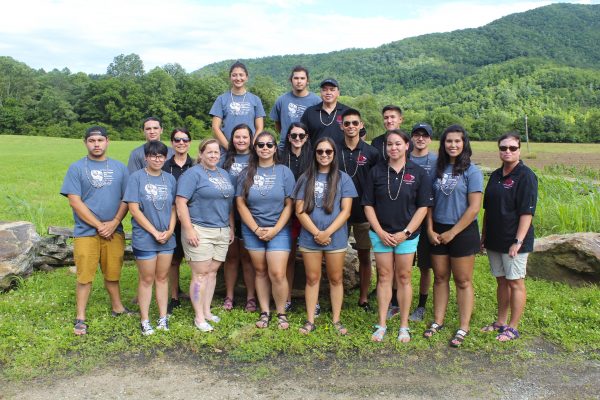 JOURNEY: The 2018 Remember the Removal Riders gathered at Kituwah Mound on the evening of Friday, June 1 for a send-off ceremony in their honor. (SCOTT MCKIE B.P./One Feather photos)

KITUWAH – On a breezy late spring evening, 18 Cherokee men and women converged at the Kituwah Mound, the Mother Town of the Cherokee, to join together, reflect, pray, and think about an upcoming journey.  The 2018 Remember the Removal Riders received a send-off from  several hundred people during an event held at Kituwah on Friday, June 1.

“My whole purpose was to get to this point,” said Taylor, who sustained an injury just prior to last year’s ride.  “If I could get through training without killing myself; that’s been my purpose.”

He said this year’s training regimen has been very hard.  “We’ve done things this year that we didn’t do last year.  We climbed to the top of Clingman’s Dome which is the second highest peak on the east coast.  Then, we went to Asheville and climbed over Balsam and that was a tough ride.”

Taylor said his confidence has built throughout this year’s training.  “I knew I could do it.  I know I can make the ride.  For me, I just have so much unfinished business, and now I feel that I’ve gotten to the journey and I’m going to take it.  I’m not going to have any expectations other than amazing things are going to happen.”

Lambert, a student at Cherokee High School, said, “I’m super-nervous.  I’m very emotional.  Luckily, I haven’t cried yet.  It’s going to be tough for all of us having to leave all of our families, but we’re in this together.  It’s a team ride.  We’ve got each other’s backs, and I look forward to bonding with the rest of the team, and I’m super-excited.”

Coggins said her emotions are running the gamut.  “I’m excited, nervous, but it’s getting a lot better now that we’ve gotten everyone together…like some of the other riders were saying while we were getting blessed, we’re one people.  This whole ceremony is very emotional.  I’m excited.  I’m ready to go.” 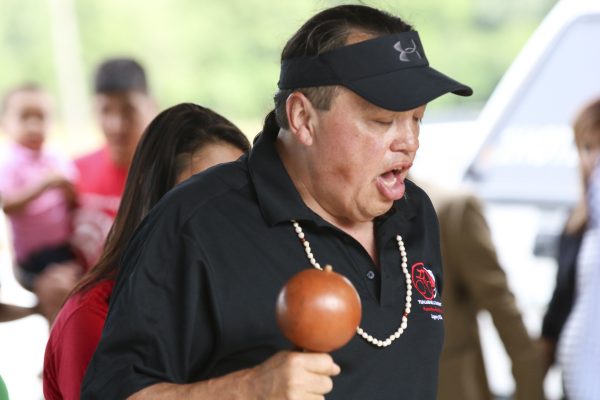 FRIENDSHIP: Bo Taylor, an EBCI tribal member participating in this year’s Remember the Removal Ride, leads the Cherokee Friendship Dance during a send-off ceremony in honor of the riders held at the Kituwah Mound on Friday, June 1.

Principal Chief Richard G. Sneed, a Remember the Removal alumni, spoke at Friday’s event and told this year’s riders, “You are never going to be the same after this.  This event is going to change your life.”

Brett Riggs, WCU’s Sequoyah Distinguished Professor, spoke at the event and said, “You know that you are about to embark on one of the great journeys of your life.  You’ll be retracing the exodus of Cherokee people from this place.”

He added, “This ride will change all of you.  It will make you as one and bring you together as a community.  You’re going to struggle in mind and in spirit as you ride to remember that dark passage of people who walked that road 180 years ago.  But, like the phoenix that is the Cherokee people, you will rise from the ashes stronger and brighter than ever before.”

Sheyahshe Littledave, who participated in last year’s ride, spoke during Friday’s event and gave some words of encouragement to this year’s riders.  “Completely out of my element, I joined a group of six strangers.  I trained with them and learned to rely on them emotionally and mentally, and I love them.  I am forever indebted to my team for what they have given me.”

She joked about Missouri and said that this year’s riders should definitely listen to the alumni about the state some have dubbed “Misery”.  “The road is just a never-ending pothole.  You’ll probably bounce your way through.  You might even get a flat, but you’ll be ok, you’ve got your team with you.”

Littledave said that no matter what challenges the riders will face, “It’s ok, you’ve got your team with you.”

Taylor summed it up, “I want the Creator to open up doors for us as a team.”

According to information provided by the Remember the Removal Bike Ride, the schedule is as follows:

To view or purchase photos from this event, visit: https://onefeather.smugmug.com/COMMUNITY-and-NEWS-EVENTS/2018-Community-and-News-Events/Remember-the-Removal-Send-Off-from-Kituwah-June-1/