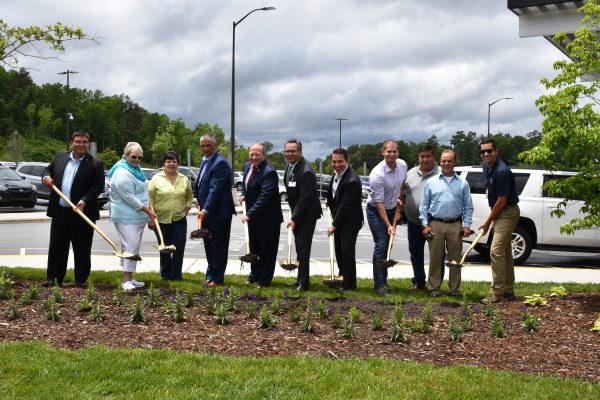 MURPHY – The rain couldn’t stop the shovels from turning the dirt at the Eastern Band of Cherokee’s solar farm groundbreaking at Harrah’s Cherokee Valley River Casino on Tuesday, May 29. Tribal leaders and leadership from Siemens Government Technologies were all in attendance despite the wet weather.

“Our Tribe is helping set the standard,” said Principal Chief Richard G. Sneed. “We’ve been really blessed to have had success with our properties. But, along with that success comes a responsibility to go green and be environmentally friendly for generations to come.”

Helping lead the project for the Tribe is Secretary of Agriculture and Natural Resources Joey Owle. According to Owle, the new solar array will generate over 700 kilowatts of electricity – enough to power 10 percent of the electrical needs at the Harrah’s Cherokee Valley River Casino – roughly $100,000 in annual savings.

“Siemens is really pleased at the opportunity to bring Tribal and Federal resources together to deliver an environmentally sustainable project,” said Sam Lewis, vice president for Automation and Services, Siemens Government Technologies. “This project will help defray the Tribe’s operating costs, enabling them to support other Tribal programs while simultaneously helping the Tribe meet their energy goals.”

Tribal Council Chairman Adam Wachacha helped reiterate the importance of seeking green solutions for The Eastern Band. “Solar energy helps us honor our long-standing tradition to use the resources around us in the most effective manner possible.”

– Office of the Principal Chief

For more information on this project, read the following One Feather article: https://www.theonefeather.com/2018/04/contracts-awarded-for-valley-river-solar-power-farm/