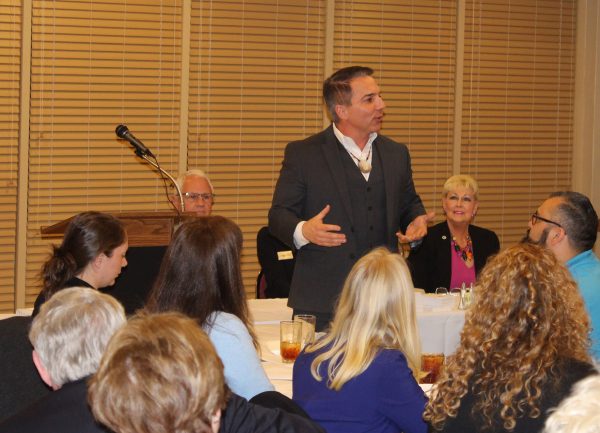 COMMISSION: Principal Chief Richard G. Sneed addresses the members of the Southwestern Commission after the group added the Eastern Band of Cherokee Indians as an official member during a meeting at the Chestnut Tree Inn in Cherokee on the evening of Monday, March 26. (SCOTT MCKIE B.P./One Feather)

A group consisting of governmental entities and leaders from the seven westernmost counties in North Carolina now includes the Eastern Band of Cherokee Indians.  The Southwestern Commission added the Tribe to its list of members during a meeting at the Chestnut Tree Inn in Cherokee on the evening of Monday, March 26.

“We think this is a very appropriate thing to do,” Cal Stiles, a Cherokee County Commissioner who serves on the Southwestern Foundation’s Board of Directors, said as the motion was made during Monday’s meeting to include the Tribe in the organization.  “There has been a lot of work on this, and we’d like to make this change to add them to our organization.”

The move to add the Tribe was approved unanimously.

Following the vote, Principal Chief Richard G. Sneed spoke, “I think this is just a tremendous opportunity for the Tribe but also for the organization…the Tribe is a driving economic force, and it’s true we employ a lot of people in the region.”

During Monday’s meeting, many issues were discussed from housing needs in the region to economic development opportunities.  Chief Sneed touched on those issues in his statement, “It’s interesting to hear a lot of the comments about housing.  We have the same sort of discussions in our meetings all the time.  So, clearly the issues that we face are the same issues that we’re facing in the region, and I believe we’re stronger together and that if we work together we can find solutions to all of these.”

He concluded by saying, “Thank you for this opportunity, and it’s good to have a seat at the table.”

Rich Price, Mountain West Partnership board chairman, was the guest speaker at Monday’s event, and he touched on the need for cooperation within the area.  “Our county communities are not mutually-exclusive.  They are very dependent on each other.”

He commented that the idea is to share ideas to solve problems as a region.  Of the Commission’s work he noted, “It is proving to be very collaborative.”

The Southwestern Commission was formed in 1965.  Information from the Commission’s website states, “Initially, the driving factor behind this movement was money.  Between 1965 and 1975, state legislatures and the U.S. Congress created thousands of grant-in-aid programs totaling billions of dollars in funds available to local governments. Funds were appropriated for water supplies, sewer systems, housing, solid waste, emergency medicine, juvenile delinquency, recreation, health care, law enforcement, economic development, job training, senior citizens services and a plethora of other purposes.  Local governments needed state and federal aid. State and federal legislators desired to prevent duplication and mismanagement of the local projects and services they funded, while state and federal auditors demanded that the grants be administered properly. Of the hundreds of conditions imposed on grants, the most universal were (and remain today) the requirements that applicants demonstrate partnership, economy-of-scale, regionalism, efficiency, leveraging, intergovernmental cooperation and written proof that a high priority was (is) placed on engaging in joint ventures with neighboring local units.”