ON THE SIDELINES: How about an alumni weekend?

Yesterday, I covered one of the most enjoyable games all year as the first annual CHS Lady Braves Alumni basketball game was held at the Charles George Memorial Arena.  The game saw players from multiple decades take to the court again, and I must say it was quite competitive.

The players may have lost a step or two from their high school days, but man there were some nice plays.  Chelsea Taylor Saunooke had a keen spin move inside for a nice lay-up and Laura Blythe hit a four-foot jumper that both drew lots of applause.  There were some nice passes, three-point shots, rebounds, and even a few steals. 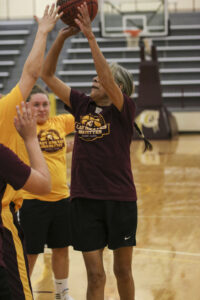 STILL GOT IT: Mary “Missy” Crowe, CHS Class of 1981, goes for a shot in the second half of the first annual Cherokee High School Lady Braves Alumni basketball game held on Saturday, March 24 at the Charles George Memorial Arena. (SCOTT MCKIE B.P./One Feather)

Every single one of the women who played did a great job.  It truly was a neat event.  Kelsey Jackson, the event’s organizer, should be commended for a job well done!

Following the game, all of the players went to the middle for a final cheer and many pledged to play another next year.

That leads me to this column – wouldn’t it be cool if we could see other alumni games in the future?

Why not try an alumni weekend with games in all sports?  You could have a Braves and Lady Braves basketball game on Friday night.  Then, have baseball, softball, and volleyball during the day on Saturday afternoon and finish it off with a football game on Saturday night complete with alumni cheerleaders.

The games themselves could have a minimal admission price with all of the proceeds going to a  cause designated yearly.

Given the right amount of planning and advertising, I think these games would draw crowds and could be played towards the end of the school year so the weather would be nice for the outside sports as well as nice for those traveling from out-of-state.

Alumni games are fun, and I’m sure the crowds would dig them just as much as the people in attendance at yesterday’s event did.

Hippocrates said, “Sport is a preserver of health.”

That certainly is true of those athletes I saw yesterday.