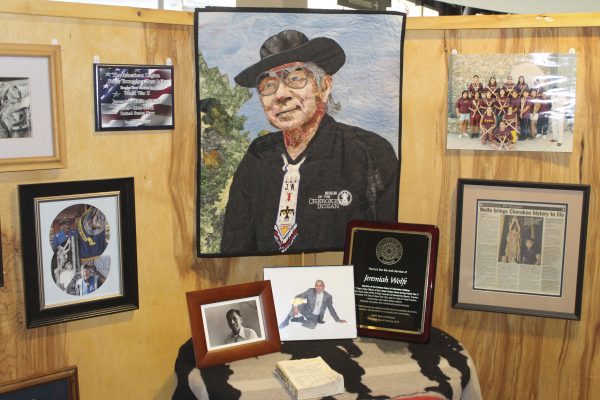 BELOVED: The lobby of the Chief Joyce Dugan Cultural Arts Center was filled with photos and life mementos honoring the life and legacy of Beloved Man Jerry Wolfe as a service was held there on the afternoon of Saturday, March 17. (SCOTT MCKIE B.P./One Feather photo)

The life and legacy of a Beloved Man of the Eastern Band of Cherokee Indians was honored during a service on the afternoon of Saturday, March 17.  Tribal members, friends, and family filled the Chief Joyce Dugan Cultural Arts Center to honor and remember Beloved Man Jerry Wolfe who passed away on Monday, March12.

“He was a sweet man,” said Bo Taylor, Museum of the Cherokee Indian executive director and long-time friend.  “He was an awesome man.  I want to reach out to the family and say thank you for sharing Jerry Wolfe with us.”

Taylor said Wolfe was a man who made the best with what he had.  “He grew up without much, a poor Cherokee in a one-room house, and he ended up becoming a doctor.  He was at D-Day.  He was at the signing in Pearl Harbor when we did our peace agreement with Japan.  He was just kind of everywhere.”

He went on to say, “Today could be a sad day, but I’m not sad.  I celebrate.  I’m sad for the family.  I’m sad that Jerry Wolfe won’t be walking around, but he’s walking around in here.”

Taylor spoke of Wolfe’s devotion to spirituality. “He loved God.  When he was at church, he was on the front row.  He sat in the front row and he was always ready.  Whenever the pastor needed him, he was there.  His last day of church, he gave communion.  He could barely stand, but he got up and did it.  He loved his God.”

Principal Chief Richard G. Sneed spoke of Wolfe and noted, “Jerry wore many different titles during his lifetime – sailor, veteran, artisan, historian, storyteller, teacher, community leader, linguist, and, of course, Beloved Man of the Cherokee.  Jerry had this title bestowed upon him because he embodies all of the values and virtues that we consider what it means to be a Cherokee.  The Cherokee values, the core values, spirituality, group harmony, character, integrity, honesty, perseverance, courage, respect, trust and humility, a strong connection to the land, stewardship of the Cherokee homeland, honoring the past by knowing ones ancestors, living and preserving the Cherokee culture, educating the children and being a strong role model to them, and most importantly, possessing a sense of humor and helping people make good decisions.”

Chief Sneed said love and humility were two of the strongest traits Wolfe possessed.  “As Bo said, he loved people.  He was a humble man.  In all the years I’ve known Jerry and all of the conversations I’ve had with him, I’ve never heard him say a cross word about another human being.  He was truly a man of humility.”

He added, “Men and women of greatness leave their mark on society not by the titles they have worn and not by the accumulation of material goods and possessions…of all the titles that Jerry wore, the title of greatest honor and the one which was the summation of his life and how he lived for each one of us is the title of father.”

Vice Chief Alan “B.” Ensley commented, “He was a friend.  He meant a lot of things to a lot of people.  He went all over the country saying prayers for Tribal Council for as long as I can remember.  He said a prayer at the House of Representatives in Raleigh.  You could have heard a pin drop in Raleigh that day.  Jerry meant a lot to everybody in Cherokee.  He was a storyteller, a traditionalist, a joker – he was always telling jokes.”

Following their remarks, Chief Sneed and Vice Chief Ensley presented the Wolfe family with a flag of the Eastern Band of Cherokee Indians that was folded seven times according to tribal tradition.

Derek Robinson, who grew up near the property where the current Cherokee Central Schools campus sits, met Wolfe as a young child.  “It is ironic that we are here, at this school, on this land, because this is where I met Jerry Wolfe…I grew up about 500 yards from here, across the river at the Ocoaluftee Job Corps Center.”

Wolfe taught masonry at the Center at that time.  “I was probably three or four years old, and Jerry was always around.  He and my father were the best of friends.  I had come to realize that Jerry was a full-blood Cherokee Indian, and I was mesmerized by that being a small child and playing cowboys and Indians.  You see, back then, there were no cell phones, iPads, or video games.  There was barely TV.  What we had were these fields, streams, mountains, and our imaginations to play in.  And, what better way to learn about all of this playground than from a full-blood Cherokee Indian?

Robinson said he spent a lot time with Wolfe as a child.  “He was kind enough and patient enough to take time from his instructing job to spend time teaching us about the woods, about ginseng, ramps, river cane to make blowguns, thistle to make the darts, yellow root along the riverbanks for a sore throat, about the animals…he taught me how to fish.  Jerry Wolfe was an avid fisherman.  He caught some of the biggest trout I ever saw come out of the Oconaluftee River.”

Rev. Ralph Eanes, retired pastor of the Cherokee United Methodist Church where Wolfe was a member, said “He knew that if God loved him he could love the rest of us too.  He knew that about himself because he knew things about himself that he didn’t tell anybody but God.  Life’s purpose is to bring unity wherever you are, and that was Jerry’s purpose.”

During Saturday’s service, The Robinson Family sang three songs including “The Lord Is In His Holy Temple”, “Seek Ye First”, and “I Will Arise and Go to Jesus” which they sang in the Cherokee language.

The service concluded with a special honoring from the Big Cove Community Stickball teams who honored him with the traditional Indian ball call.