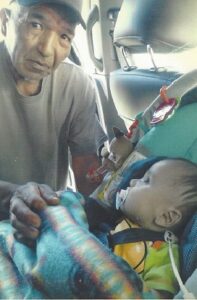 He had an honorable discharge from the U.S. Air Force.  He was formerly employed by the Cherokee’s, the Cherokee Casino, and the Grand Hotel.  He was an outdoorsman.  He fished, enjoyed watching racing, and also enjoyed playing fast pitch soft ball and any kind of sports.

He is survived by his mother, Jane Lossiah Taylor; two brothers, Jeremiah Taylor and Dennis Taylor, both of the home; one sister, Cynthia A. Meuse of Cherokee; two nephews; six nieces; one great nephew; one aunt, Dolly Taylor; great aunts, Mollie Herbold and Annie French; and uncles, Jack and Willard Lossiah.