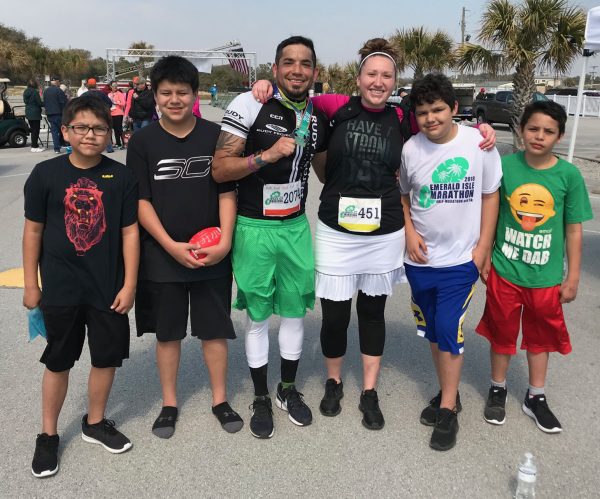 The Eastern Band of Cherokee Indians was well-represented at a recent running event on the coast.  The Emerald Isle race was held on Saturday, March 10 and included a marathon, half-marathon, and 5K races.

Kallup McCoy II participated in the marathon portion of the event, and his girlfriend, Katelynn Ledford, ran the 5K event along with four other Cherokee youth including: Native Walkingstick, Kallup McCoy III, Ashton Brady, and Michell Gayosso.

McCoy II and Ledford are both very active in the Cherokee recovery community and work to create positive experiences and chances to share their message of hope through their RezHOPE Recovery and Consulting group.

“The message that we’re trying to share is to get active and stay healthy,” said McCoy II.  “And, being able to talk to the youth and share with them about choices was a huge blessing.”

McCoy II placed 13th in the Male 30-39 division with a time of 5:20.24.  Afterwards, he was happy with his performance.  “My nutrition was good, and it was a nice race.  I just always want to represent our Tribe strongly.”

Ledford, new to races, placed 14th in the Female 20-29 division.  “It was the first time I’d ever done anything like that.”

She was unsure if running would be for her, but positive thinking prevailed.

“I was in a really bad car wreck that stemmed from my substance use, and I broke my back and my hip and had a metal rod placed in my leg,” said Ledford.  “For a long time, I said, ‘I can’t run. There’s no way I can do that.’  But, Kallup kept buzzing in my ear to try it.  I think a lot of times we get it stuck in our head the insecurity of not being able to do something.”

She added, “Finally, I started running a little bit here and there and it came gradually.  I just pushed myself.”

Of the race itself, Ledford said, “It was fun, and I ran with the boys.”

McCoy II commented, “We got a chance to talk with them about what they want to do – goals and choices. That’s what it’s about.”

Ledford said they all traveled to the race together and stopped at the University of North Carolina – Chapel Hill on the way.  “When we were on the campus, one of the boys said, ‘I want to go to school here!’ So, it’s really cool to be able to take them with us and them to experience those things and get an idea of what they might want to do.”

She said recovery has opened many doors, “If we were still out there using drugs, they might not have been able to experience that.” 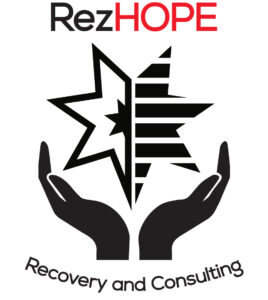 Their RezHOPE Recovery and Consulting group, which is currently under the umbrella of the Christ Fellowship Church until they receive their official 501c3 status, recently held a logo contest.  Buffalo Town, a graphic design company, won the contest and deferred their prize due to the importance of the RezHOPE organization.

In a statement, Buffalo Town wrote, “We support any cause that aims at improving not only individual health but the community as a whole.  Working with the Center for Community Health at Kansas University, we are always trying to support any initiative like yours.  ‘Why treat people’s illnesses without treating what made them sick in the first place?’ That’s a quote that I see all the time in my place of work, and it is definitely true.  If the environment is toxic, of course, the outcome isn’t going to be pretty.  Keep up the fight.”

McCoy II is all about pushing himself, and now he is ready to double his mileage for his next race – the Badwater Cape Fear, a 51-mile race on Bald Head Island on Saturday, March 17.  That race begins with 12 miles on the roads on the Island followed by 39 miles on the beach.

The first of May, McCoy II is going to run the Benge Route of the Trail of Tears, a 1,300 mile run ending in Tahlequah, Okla. The last 111 miles will be tackled within a 24-hour period in the hopes of qualifying for the Badwater 135, the world’s toughest foot race.

On these long runs, McCoy II thinks about many things – past, present and future.  “I think about things I want to do out in the community and the people that we’ve lost and that just inspires me to go harder.  But, towards the end of the races, my insecurities start coming out.”

When those thoughts creep in, he pushes them away.  “I deal with it the same way when I hear the naysayers now, and I pray and just ask God to give me strength. There’s really no secret to it, just keep praying and keep pushing.”

He ran the race at Emerald Isle not too long after an ankle injury.  “I’ve had people tell me that I needed to rest for two weeks, but if we wait for things to be perfect, then things never get done.  You just have to push through.  If you want something, go get it.  There are so many opportunities to be the change that we want to be.”

McCoy II and Ledford are busy with helping to spread their message, and he is set to speak at a Medicine Abuse Project event, sponsored by The Coalition for a Safe & Drug-Free Swain County, scheduled for Tuesday, March 20 from 7 – 8:15pm at the United Methodist Church in Bryson City.

“Instead of talking about the problem, be a part of the solution.”