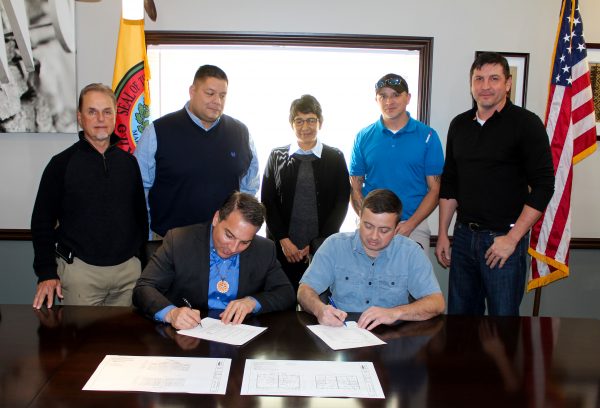 The Birdtown Community will soon have a new housing development on Fisher Branch.  A contract for the construction of the development was signed by Principal Chief Richard G. Sneed and Justin Wright, an EBCI tribal member and owner of Justin Wright Builders, Inc., on the afternoon of Tuesday, March 13.

“This process began under the Hicks administration and has been carried forward, and we’re just grateful to be able to get some dirt moving and bring it to its fruition,” said Chief Sneed.  “We’re grateful to have an enrolled member contractor heading the project up.  This is the first in our goal to put up 100 families in homes over the course of the next two years.”

The development will include a total of four units broken up into two duplex units.  Each unit will have three bedrooms and will be available for rent through the EBCI Housing & Community Development program.

“As Secretary of Housing, working for the Chief and for our people, I think that it’s exciting to keep progressing with our housing at this point and time,” said EBCI Secretary of Housing Travis Smith.  “Part of the Chief’s objective to me was that we try to put up 100 houses a year on the ground, and this is part of that process.  It’s exciting that we have an enrolled member that’s capable of doing this construction work.  We’re thankful for them, thankful for the Tribe, and thankful for the people that support us.”

Several weeks ago, tribal leaders broke ground on a new 60-unit apartment complex in the Painttown Community.  Secretary Smith noted there are several more projects that will be forthcoming soon including a single family development off of Macedonia Road which will include eight new homes, a development off of Acquoni Road, and others.

“We want to change people’s way of thinking of housing around here,” said Secretary Smith.  “If you go onto any boundary on the whole United States and you know what tribal housing looks like, and we want to change that mindset and what the looks are.  We’re really excited to be pushing some of these projects out.  We have a great team in Housing.  It’s exciting.”

A 12-month time frame for completion has been put on the Fisher Branch project, but Housing officials said it could be sooner.