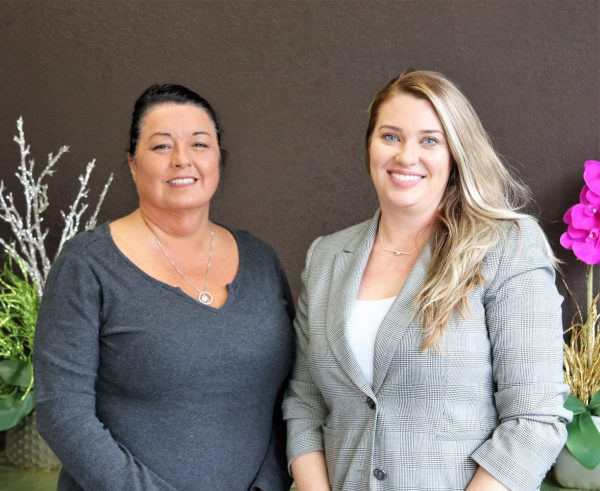 OWNERS: Collette Coggins (left) and Morgan Owle Crisp, both EBCI tribal members, have formed Seven Clans Brewing and are the first EBCI tribal members to privately own and operate an alcoholic beverage distributorship on the Qualla Boundary. (ROBERT JUMPER/One Feather)

A group of four business partners have launched a distribution business with hopes of locating a warehouse facility soon on the Qualla Boundary. They have formed Seven Clans Brewing and are the first EBCI tribal members to privately own and operate an alcoholic beverage distributorship on the Boundary. Several distributors service the needs of Harrah’s Cherokee Casino and Resort, but none are tribal member owned.

The principals of this venture are Colette Coggins, who is vice president of the company; Morgan Owle Crisp, president; Travis Crisp; and Frank Bonomo. The primary interest in the business resides with Crisp and Coggins, both EBCI tribal members.

The idea for Seven Clans Brewery came from a business meeting on a different project. Through casual conversations, Morgan Crisp and Coggins discovered that they both had an idea for a brewing company and those conversations turned into a proposal and then the launch of their business.

“It has been about four years in the making,” according to Travis Crisp.

Morgan Crisp explained that it was a combination of planning and waiting for the right timing to start the venture. Bear Waters Brewing in Canton is partnering/mentoring the start up. They are also the company’s production location, the actual brewing location, of Seven Clans Brewery’s unique offerings for their company.

Morgan Crisp says, “They are actually facilitating the brewing for us. It’s our recipes and we created everything, but they are going to be making it for us.”

They chose to contract brew instead of investing heavily in a brewing facility to reduce upfront costs and get their product to market quicker.

Coggins expects to build a facility for production “down the road” as profits from their offerings make it practical to do so and when laws permit. The partners are discussing locations and said it will depend on what they feel is a right fit for their company as to where that brewery will be. Potential sites include Cherokee, the counties surrounding Cherokee, and even Tennessee.

Coggins related that one of the biggest challenges in getting to this phase of development has been public and community education. “It is a new business. It is a new adventure for us, for the people in Cherokee. There are a lot of concerns…a lot of misinformation floating around, and we have had to overcome that. It (Seven Clans Brewing) is all legal. It is all by the law.”

Both Morgan Crisp and Coggins stressed that only their products would be distributed by the company and only to wholesale permit holders. They plan to distribute both on and off the Boundary. They are the first wholesale distribution company that is locally, tribal member owned and operated. There are several other distributors who are not tribal members.

The recently-issued wholesale distribution permit is the first of its kind, according to Travis Crisp. “It is the first permit that I know of that is reciprocal with the state, for anything, not just alcohol or whatever. It is a huge step toward tribal sovereignty…what other permits that the Tribe issues do the state recognize?”

Coggins added that some of the negative comments included calls for the Tribe, as a government to do it themselves and reap the benefit. She says the reality is that the Tribe is already doing that in the form of the 30 percent additional Alcohol Commission surcharge imposed on any alcohol that is sold on the Boundary, in addition to the revenue from retail sales on the gaming properties.

Morgan Crisp stated, “Two points that I thought were interesting when I looked at the social media was that our own people didn’t realize that they could do their own business like this. We have this bubble where people are like ‘I can’t do anything outside of the Tribe for myself. I am only able to do what our Tribe allows me to do or what my Tribe gives me.’ It made me feel really sad.”

Coggins added, “We are our own worst enemy. We suppress ourselves or our neighbor more than the government ever has. We should all be supportive of one another. If you are doing a legal business and you’re taking the risk, I think we should be proud of any of our neighbors.”

She feels that a tribal member who does business on the Boundary, creates jobs, revenue, and supports families for the Boundary should be encouraged.

One of the site locations mentioned for the Seven Clans Brewery’s distribution warehouse is the site of the old Cherokee Fun Park on US Hwy 441. Coggins had previously secured that site and had discussed creating a bear sanctuary, potentially in that location. “We actually have a master plan in the works right now for that piece of property that is known as the Fun Park property…We have never said that we were not doing a wildlife sanctuary there,” related Coggins.

The business partners stated that they have 25 acres on the property to work with, so having a distribution warehouse on the Fun Park property will not rule out other uses like a sanctuary. Coggins says that it will be a private warehouse in similar fashion to the warehouse that already exists for storage of alcohol already located on the Boundary for the gaming operation. They do not intend to have exterior signage to the warehouse for security reasons, reducing public awareness that alcohol will be on the property, like the existing warehouse used by the tribal alcohol authority.

According to the owners, there is high interest from other tribes about the Seven Clans Brewery and their product. They believe that their success is only limited by “how fast we can make it”.

Coggins and Morgan Crisp have chosen a name for their initial offering that has raised eyebrows and interest in the tribal community, even provoking a tribal member to start a petition to block the use of the name. The company is launching a craft beer titled “Mother Town Blonde” to christen the operation.

Asked about the thought process for naming the beverage, Morgan Crisp said, “I think, for me, when we started coming up with it, I was trying to figure out what is, maybe, a unifying word.”

She said that when she named the company “Seven Clans Brewing”, she could have used “Cherokee” but she didn’t want to be exclusive. She stated that she felt Seven Clans was more inclusive of the people and culture. “I was just trying to pinpoint where are we from; where did we start; what was our first town. I didn’t want to use our Cherokee word for that because I knew that it would be controversial and I didn’t want to share that word with everybody, so I used Mother Town.”

She chose to use the imagery of Selu for the label of the beverage because she felt it represented the strength of Cherokee women. She said that it is not a traditional way to share the Cherokee story and culture but it will help carry the Cherokee story to a new audience. She equated the business and brand to local, tribal artwork with the history and culture being presented in a new medium and with a new interpretation by younger people.

Both Coggins and Morgan Crisp stated that this was an attempt to honor their culture in their work. They also feel that there will be an added tourism benefit as a new generation sees their product and becomes interested in Cherokee. She also pointed out that other, off Boundary-non- tribal, microbrewers routinely use Cherokee names and references on their alcoholic drink offerings with little to no public outcry.

When asked about the controversial nature of alcohol and merging Cherokee cultural references, Coggins stressed, “None of it is meant to be disrespectful, certainly not degrading, but to be promotional and proud. It is really not a negative thing…It’s all about choices”.