Mariah Bahe, of Navajo and Eastern Band Cherokee heritage, is a top-ranked boxer in the teen ranks with broad ambitions on her mind.  She won the Intermediate Female 85lb. division at the USA Boxing Western Elite Qualifier Regional Open Championship held in Albuquerque, NM on March 4-10.

“I feel very thankful and motivated for whatever is to come,” said Bahe, who lives on the Navajo Nation in Chinle, Ariz.  “I train every day, and I push myself to work harder and to be stronger each and every day.  I think this tournament sets me off in 2018 and is just like a little warm-up for the Junior Olympics in West Virginia.”

The National Junior Olympics event is set for June 24-30 in Charleston, WV.  With her win in Albuquerque, she qualified for the Elite Youth National Championship and Junior and Prep Open on Dec. 2-8 in Salt Lake City, Utah. 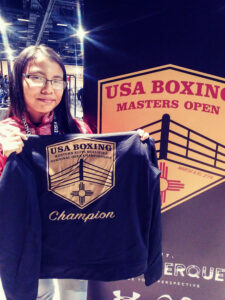 Mariah is coached by her father, John C. Bahe Jr., who is the head coach of the Damon-Bahe Boxing team.  “My daughter is ranked number one in the USA at 13-14 years old 85lbs. She is an accomplished boxer and loves the sport with the dream of going to the Olympics.”

He added, “Mariah is an awesome boxer because she trains so hard.”

“I am a proud coach as well as a proud parent of an amazing, talented athlete,” said John Bahe Jr. “No words can describe how she makes me feel being the only daughter I have with four older brothers.  She stands her ground daily.  I am thankful.  My blessing and hope is that she achieves her goal of becoming an Olympic boxer.”