Warriors of Anikituhwa to represent Tribe in London Parade 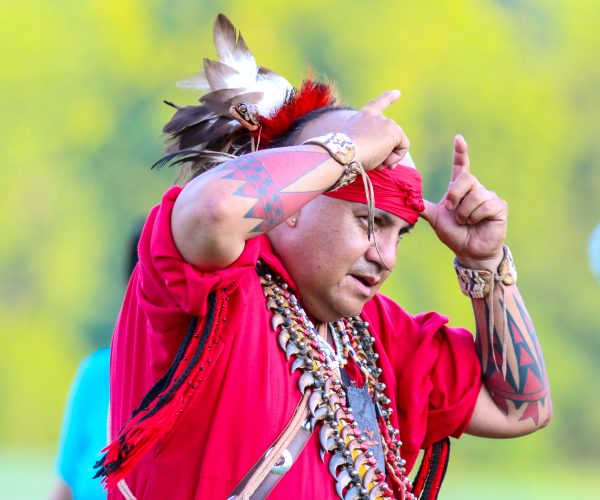 HISTORY: The Warriors of Anikituhwa, including Sonny Ledford (shown dancing at a past Kituwah Celebration), will represent the Eastern Band of Cherokee Indians at the London New Year’s Day Parade on Jan. 1, 2019. (SCOTT MCKIE B.P./One Feather photos)

Later this year, members of the Warriors of Anikituhwa will represent the Eastern Band of Cherokee Indians overseas in a journey reminiscent of 1762.  The group has received an invitation and will participate in the prestigious London New Year’s Day Parade on Jan. 1, 2019.

By doing so, they embark on a journey which will mark the first time in over 255 years that an official Cherokee delegation has visited England.  Ostenaco, Pigeon (reported in some instances as ‘Pouting Pigeon’), and Stalking Turkey visited England in 1762, escorted by Lt. Henry Timberlake, where they met with King George III and drew huge crowds during their stay.

Seven members of the Warriors of Anikituhwa will make the trip, which will last from Dec. 27, 2018 to Jan. 3, 2019, including: James “Bo” Taylor, John “Bullet” Standingdeer, Daniel Tramper, Sonny Ledford, Mike Crowe Jr., Jarrett Wildcatt, and Will Tushka.  Several Cherokee women are slated to go as well such as: Tyra Maney, Kristy Maney Herron, Stephanie Maney, Dawn Arneach, and Delanna Studi.  Charlie Rhodarmer, Sequoyah Birthplace Museum executive director, will portray Lt. Timberlake during the parade, and Ethan Clapsaddle, Museum of the Cherokee Indian program director, will represent the Museum on the trip.

“When I first heard about the trip, it triggered thoughts about the history part of it,” said Ledford.  “I never thought I’d get a chance to go there…for us, as a people, having representation back in that country again after so many years – that’s what made my decision for me.  If it was just a trip to go sight-seeing, I would have probably passed it up.  But, to go over there and actually represent our people – because I know we’re going to have a lot of questions about our culture, language, and history – that’s what our group is about, educating people.”

He added, “Instead of them seeing us on a video or YouTube, they’ll actually get to meet us…I’m excited about it…representing our people is my main thing, I just want to do a good job.”

Wildcatt noted, “I see it as a big opportunity.  For one thing, it’s been over 250 years since a delegation of Kituwah people, Cherokee people, have gone to England.  At that time, it was Ostenaco, Piegeon, and Stalking Turkey.  I don’t see us on the magnitude of those three, but it’s pretty cool.  I’ve only been in the United States.  I’ve never traveled out of the country, so, it’s going to be a little different.  In a way, it’s going to be like a different world.”

He is looking forward to sharing with those in England.  “I’m just going to take on this opportunity head-on and look at it as a way of representing our people and representing a way of life as a way to share our dances, our language, the way we are as human beings.”

Crowe said being able to go on the trip is humbling.  “To be making the representation for Natives in general, and certainly our people, the Eastern Band in particular, in this day and age is humbling to have an opportunity like that.  I think many people would jump at that chance, and of course, I was quick to say yes…this is right up our alley.  This is the work that we’re supposed to be doing – representing the Eastern Band, representing Cherokees as a whole, so I’m thankful to have that opportunity.  We also hope to retrace some of the places that those former delegations had traveled to in the 18th century.”

Rhodarmer said, “It will be a great honor to represent a gentleman and officer who recorded what Cherokee life was like in the mid-18th century in his memoirs. I admire his descriptions and detail to the songs, dances, clothing, food, houses, and just Cherokee life in 1762.”

The idea for the trip came about quite simply.  Arneach, Museum of the Cherokee Indian executive assistant, was watching this year’s London New Year’s Day Parade on television with family and discussion ensued about the possibility of Cherokee people attending as a group.  She contacted Parade officials and made an official request to be looked at a group.

A few weeks ago, she received a letter from Robert Bone, London New Year’s Day Parade Festival executive director, inviting the group to the Parade.  Bone wrote, “The event is supported by The Lord Lieutenant of Greater London, and his Deputies representing the Queen.  The event boasts a list of active patrons and supporters including The Lord Mayor of the City of Winchester, The Mayor of London, The Prime Minister, and The Minister of Culture of Great Britain.  The New Year’s Day Parade is the largest event of its kind in the world with a street audience counted in hundreds of millions.”

Tyra Maney, an employee at the Museum of the Cherokee Indian, is excited about the trip, “I think it’s really cool.  We get people from England all that the time that come in and say, ‘I didn’t know the natives were still around.’  So, I think it’s a great thing to represent the Eastern Band and show them that we’re still here and we’re not in the past like they think we are.”