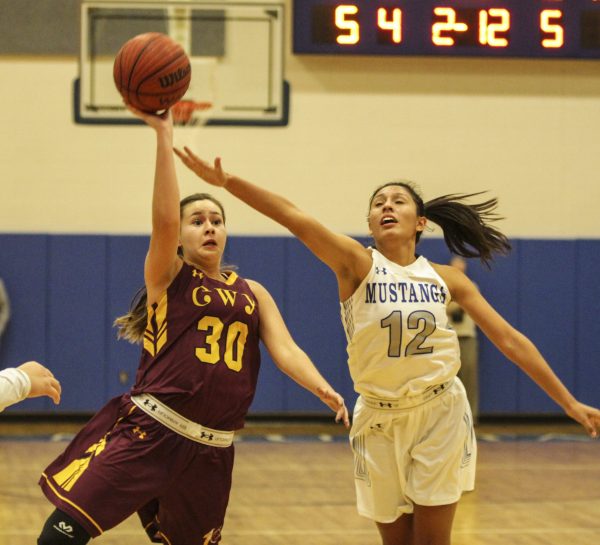 ALL-DISTRICT: Cherokee’s Tori Teesateskie (#30) takes a shot while Smoky Mountain’s Shay Tisho (#12) defends during a game at Smoky Mountain on the evening of Dec. 19, 2017. Teesateskie and Tisho, both EBCI tribal members, have been named to the All-District 12 first team. (SCOTT MCKIE B.P./One Feather)

Tori Teesateskie, a junior at Cherokee High School, and Shay Tisho, a senior at Smoky Mountain, both EBCI tribal members, have been named to the All-District 12 first team (western North Carolina) by the North Carolina Basketball Coaches Association. Both players surpassed the 1,000 point mark for their career this season.

Teesateskie, who was also named All-Big Smoky Mountain Conference, averaged 15.7 points and 3.8 rebounds per game and finished the season with 298 points, 72 rebounds, 42 assists, and 40 steals.  Tisho, the Mountain Six Conference Player of the Year, averaged over 15 points and 9 rebounds for the season.

Erin Teesateskie, an EBCI tribal member and senior at Robbinsville, was named to the second team.  Also named to the All-Big Smoky Mountain Conference team, she averaged 15.0 points and 10.3 rebounds per game.  On the season, she had 390 points, 268 rebounds, and 45 steals.

Cherokee’s Tye Mintz, senior, was named to the boys All-District second team.  He also surpassed the 1,000 point mark for his career this season and averaged 16 points and 9.4 rebounds a game.  On the season, he had 288 points, 169 rebounds, 33 assists, and 34 steals.