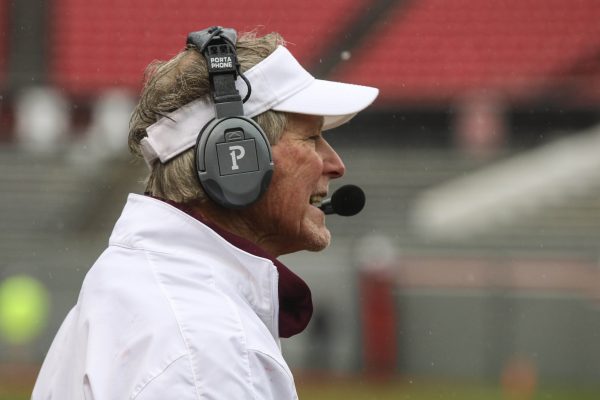 LEADER: Kent Briggs, Cherokee Braves head football coach, was named an Honorary Member of the Eastern Band of Cherokee Indians during the regular session of Tribal Council on Thursday, March 1. He is shown on the sidelines of the 1A State Championship game on Dec. 9, 2017 at North Carolina State University. (SCOTT MCKIE B.P./One Feather photos)

Kent Briggs, Cherokee Braves head football coach, led his team to a state title this past season, and now he has another title.  During its regular session on the morning of Thursday, March 1, Tribal Council passed legislation designating Coach Briggs as an Honorary Member of the Eastern Band of Cherokee Indians.

Council passed Res. No. 143 (2018), which was submitted by the 2017 Cherokee Braves football team, unanimously.  “Mr. Kent Briggs has given selflessly and built a strong foundation for our students and athletes through his empathy, encouragement, determination, commitment, and enthusiasm as he inspires our students to reach down into their souls to bring forth their very best,” the resolution states.  “Despite his recent health and battle with cancer, he continued to be present for our students and athletes as a coach, leader, and mentor.”

The legislation went on to state, “His inspiration and motivation have created more than a team.  He has created a family.”

The last part of the resolution stated he was given the honorary member designation “for his unselfish dedication and commitment to our students, team, school, community, and Tribe.”

Coach Briggs, shocked by the gesture, said emotionally, “I’m completely without words.  This is the greatest honor I’ve ever had or will ever have.”

He added, “I’ve never had a greater year in coaching than I’ve had this year, and it wasn’t necessarily about winning the state championship.  It was about the journey, and going on the journey with these guys and the Cherokee Nation will always be my best and happiest year…to give me this honor, I’m blown away.  I don’t know what to say except for I’m very, very proud and very honored, and I will do all I can do to uphold the representation of being part of this Tribe.” 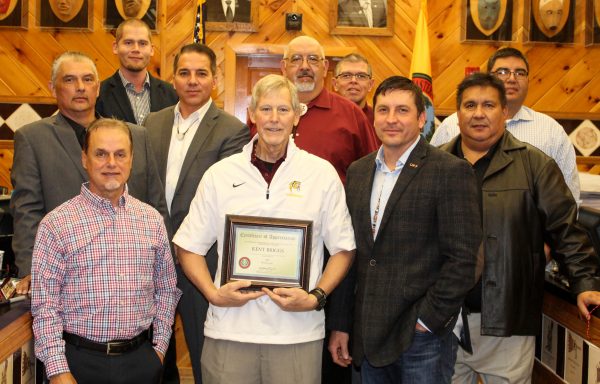 Principal Chief Richard G. Sneed presented Coach Briggs with a Certificate of Appreciation designating him as an Honorary EBCI tribal member, and Vice Chairman David Wolfe presented him with a Cherokee wood carving as a gift from the Tribal Council.

Tribal Council Chairman Adam Wachacha stated, “On behalf of the Tribal Council, we too would like to thank you for your hard work and dedication and everything that you put into what a coach should be.  To come into this community and be the person that you are and show your humbleness, we appreciate you.”

The 2017 Braves state championship team was introduced during the event, and prior to their introductions Coach Briggs spoke on the team and their season.

“Our guys worked really hard to accomplish the things that they did this year…for us, it was a great honor to represent Cherokee Nation.  These guys have worked really hard to put themselves in this position, but the biggest thing that I am proudest of is how they represented our nation.  They went out there on the field, and obviously played well, but they also did the things that you have to do to make Cherokee proud.”

He went on to say, “The biggest thing that I think got us to a state championship was believing in ourselves, these guys believing that they could do it, and they did that because Cherokee believed in them.”

Wolftown Rep. Bo Crowe, who volunteers his time with the team as a statistician, noted, “It’s been an honor to be able to stand on the sidelines and listen to the way the coaching staff works and how the boys hold themselves.  They are well-deserving of this state championship…”

Birdtown Rep. Albert Rose said, “I’m proud of you men for making history and being the best in the state…I get emotional because I’ve played in state championships and I know what you guys sacrificed and have been through…take the lessons that you’ve learned from winning state and what you went through and use it in life…football lessons are life lessons.”

He then said, “Coach Briggs, I just want to welcome you to the Eastern Band.”

Birdtown Rep. Boyd Owle said, “When you have a coach of the high caliber as Mr. Briggs here, it streams down to the players and that’s what happened this year.  We had a great team.”