“Let me win.  But, if I cannot win, let me brave in the attempt.”  Those words echoed through the mountains from the loud speaker at the old Cherokee High School track on Friday, May 6 as Tony Wolfe, member of the Qualla Boundary Special Olympics program, recited the Special Olympics Athlete’s Oath to officially open the Far West Spring Games.

For the second year in a row, the Qualla Boundary program hosted the event which drew around 250 athletes from various programs including:  Graham County, Clay County, Macon County and Cherokee County.

“We are excited to have such a great turnout for the games today,” Lana Lambert, Qualla Boundary program coordinator said on Friday.  “Today is all about the athletes and their competition and recognition.  I hope everyone has a happy spring games.” 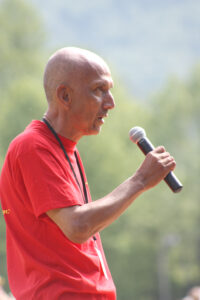 A torch run, consisting of members of various area law enforcement agencies along with volunteers and athletes, began on US441 earlier in the morning and winded through the streets of Cherokee culminating in the stadium.

Principal Chief Michell Hicks carried the torch into the stadium and lit the official flame marking the beginning of the games which was immediately followed by the invocation by Qualla Boundary athlete Dakota West, the posting of the colors by the Cherokee High School JROTC Color Guard and Wolfe’s recitation of the oath. 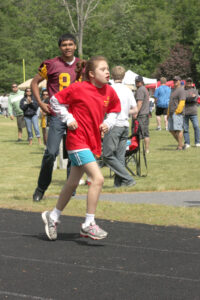 “Tony, thank you for your leadership,” Principal Chief Michell Hicks said to the crowd in praise of Wolfe’s accomplishments.  “We appreciate everything that you do.”

The Cherokee Elementary School Traditional Singers then recited the “Pledge of Allegiance” and sang “God Bless America”, both rendered in the Cherokee language.

To view a photo gallery of this event: