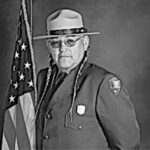 A full-blood Mandan-Hidatsa Indian from western North Dakota, the 56-year-old Baker has been a park superintendent for 15 of his 30-plus years in the National Park Service. He’s spent most of the past six years at Mount Rushmore, one of America’s icon parks, in the Black Hills of South
Dakota.

Baker is a widely recognizable figure in Indian Country for his work as a mediator and facilitator on issues that involve tribes and the National Park Service. He’s also a familiar face on American history television programs. Baker was a consultant to and an on-camera historian in the 1997 Ken Burns film “Lewis and Clark: The Journey of the Corps of Discovery.” He toured with Burns, writer Dayton Duncan and the late historian Stephen Ambrose to talk about Lewis and Clark and American Indian perspectives of the Expedition of the Corps of Discovery. He also appears in the recent production by Burns and Duncan, “The National Parks: America’s Best Idea.”

As the first superintendent of the Lewis and Clark National Historic Trail from August 2000 to June 2004, Baker led planning, development and initial operations of “Corps of Discovery II: 200 Years to the Future.” The mobile mini-national park traveled to 100 communities across the United States during the Lewis and Clark Bicentennial. The exhibit’s “Tent of Many Voices” was an education and entertainment venue that Baker said became particularly important for American Indian voices on history and culture. More than a half a million people visited the exhibit during its tour.

Baker and other American Indian leaders successfully labeled the Bicentennial a commemoration instead of a Bicentennial celebration. “That remains an important distinction,” Baker said. “The National Park Service recognized that Lewis and Clark coming to Indian Country was no celebration for us. They signaled the end of life as we had known it for eons.”

Jarvis said Baker begins his new assignment April 24 and will keep an office in the Black Hills. “I’ve asked Gerard to take this position because with his skills and contacts I believe we’ll come to resolution on these issues.”

Baker said his new job is to continue the relationship building he did with tribes during the Lewis and Clark Bicentennial and in his time in South Dakota as he led staff to expand the story of Mount Rushmore to include wider perspectives of history and culture – of the entire Black Hills area that includes the iconic monument to George Washington, Thomas Jefferson, Abraham Lincoln and Theodore Roosevelt.

Baker said, “This really is a natural next step in my career and it’s what I’ve been doing all of my life: learning about people, our history and culture, talking to others, sharing stories and learning to appreciate other perspectives. It’s an opportunity we in the National Park Service can’t miss.”
Baker began his National Park Service career in 1979 as a park technician at Knife River Indian Villages National Historic Site in North Dakota.  In 1981 he moved to the historian position at Fort Union (N.D.) Trading Post National Historic Site before assuming the North Unit District Ranger job at Theodore Roosevelt National Park in 1985.

In 1990, Baker transferred to the U.S. Forest Service where he served at the Little Missouri National Grasslands, also in North Dakota, at the Beartooth District in Red Lodge, Montana, and the Ashland District of Montana before returning to the National Park Service in 1994 as superintendent of Little Big Horn Battlefield National Monument, Crow Agency, Montana.

In 1997 Baker received the National Park Service Intermountain Regional Director’s Award for Cultural Resource Management and a team performance award for his work with the Indian Memorial at Little Bighorn Battlefield. He was named superintendent of Chickasaw National Recreation Area in Oklahoma in 1998, and received the U.S. Department of the Interior’s Honor Award for Superior Service during his service at the park.

Although Baker left the Lewis and Clark Trail halfway through the Bicentennial to become superintendent at Mount Rushmore, he appeared as a speaker in the Tent of Many Voices on occasion and was on hand for the end of the tour when the exhibit made its final stop under the Arch of Westward Expansion on the Mississippi River waterfront in St. Louis. Baker was recognized with the Department of the Interior’s Superior Service honor award for his management of Corps of Discovery II.

Baker is from Mandaree, N.D., on the Fort Berthold Indian Reservation. The reservation is the home of the Mandan, Hidatsa, and Arikara Tribes. Born and raised on his father’s cattle ranch, he spent his early years in a traditional Indian home and learned his culture through oral histories shared by clan relatives.

Baker attended reservation schools and was graduated from St. Mary’s High School in New England, N.D. He is a graduate of Southern Oregon State University, Ashland, Ore. Baker and his wife, Mary Kay live in the Black Hills. They have four grown children, a son, three daughters and seven
grandchildren.